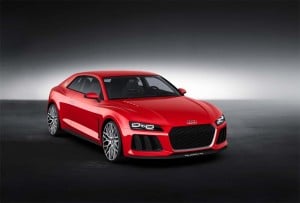 Audi’s Sport Quattro Concept is about to make a return engagement – albeit renamed the Sport Quattro Laserlight to put a focus on the show car updates newly installed laser headlamps.

The striking hybrid design made its first appearance at the Frankfurt Motor Show last autumn and, in its revised form will debut at the sprawling Consumer Electronics Show in Las Vegas next week.  Though designed to celebrate the maker’s original, 1983 Sport Quattro, the show car can be seen as “pointing the towards the future,” the maker suggests, hinting that a production version could soon follow.

The German muscle car now features twin headlights combining matrix LED low beams and laser high beams, an approach that, “leave(s) all previous systems in the dark, suggests Dr. Ulrich Hackenberg,” the technology chief at Audi’s parent, Volkswagen AG. “With its higher performance as well as new display and operating systems with cutting-edge electronic performance,” he adds, “We are showing the future of Audi here.” 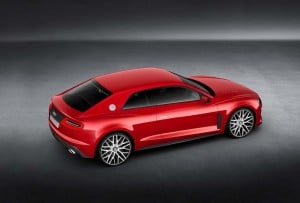 Even as automakers begin the migration to energy-efficient LED lighting, several manufacturers are beginning to explore the potential of yet more advanced laser lamps.  The “bulbs” are significantly smaller than LEDs, barely microns in diameter, but they can readily light up the road to a distance of a third of a mile, Audi notes, adding that the laser’s on the Sport Quattro Laserlight have “approximately twice the lighting range and three times the luminosity of LED high beam lights.”

The maker plans to introduce the laser lighting system this year in its updated endurance racer, the R18 e-tron Quattro.

Though now painted a bright red, the Laserlight show car retains the basic lines of the Quattro Concept first seen in Frankfurt – itself a paean to the groundbreaking 1983 Sport Quattro, with details such as the angular, flat C-pillars, the blisters above the fenders, and the overall, muscular design. It balances the retro touches with some decidedly modern design elements, such as the hexagonal, single-frame grille, and carbon-fiber-reinforced polymer splitter, sill extensions and front spoiler lip – and now the laser lamps.

Powering the Audi Sport Quattro Laserlight is a plug-in hybrid all-wheel-drive system that combines a 552-horsepower 4.0-litre twin-turbo V8 gas engine with a 148-hp electric motor – for a combined 700 hp and peak torque of 690 lb-ft of torque.  An eight-speed automatic gearbox links up with the requisite Quattro drive system. 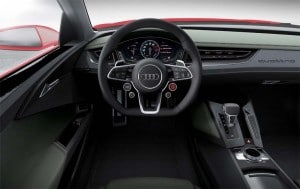 Intriguingly, the numbers Audi quotes will likely impress both performance drivers and environmentalists. It claims 0 to 100 kmh (0 to 62.5 mph) of just 3.7 seconds – a wee bit faster than the new Chevrolet Corvette Stingray, it should be noted – and a top speed of 189 mph. At the same time, Audi anticipates a range of 31 miles on electric power alone, European-rated fuel economy of 94 mpg and CO2 emissions of a mere 59 g/km.

The inside word is that Audi is expecting to put at least a limited number of Quattro Coupes into production about two years from now, though the maker remains mum on that topic.

The decision to introduce the updated concept at CES, in Las Vegas, rather than at this month’s Detroit Auto Show is no surprise. A number of automakers are using the big electronics convention – the largest annual gathering in Sin City – to debut their latest high-tech products and technologies.