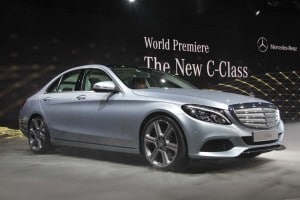 What do you do when there’s a new Baby in the house?  In the case of Mercedes-Benz, what was once the “Baby Benz” is about to grow into a much more sophisticated luxury sedan offering many of the latest, high-tech features found in the German maker’s top-line E- and S-Class models.

The Mercedes C-Class is getting a major makeover for 2015, the updated model making its debut at the North American International Auto Show.  The move comes soon after the addition of a new “entry-level” model, the CLA, which is proving to be the most successful launch ever for the German maker’s U.S. sales subsidiary.

The 2015 remake of the Mercedes C-Class helps separate the two models and allows them to target different market niches.  That’s good news for buyers of what was original sold as the Baby Benz.  The 2015 model is larger yet lighter, more aerodynamic and more fuel-efficient and will offer a broad new array of features including the full array of so-called Intelligent Drive technologies only recently added to the E- and S-Class models, said Steve Cannon, CEO of Mercedes-Benz USA.

“We believe this new model will set an absolute benchmark in a very competitive segment,” Cannon told TheDetroitBureau.com. 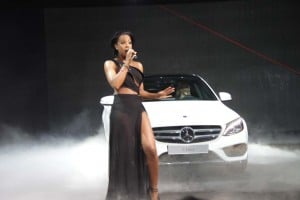 The new Mercedes C-Class gets a musical introduction.

The new C-Class is 3.7 inches longer than the outgoing model and 1.6 inches wider, with a wheelbase that’s been stretched 3 inches.  It also adopts more lightweight materials for its chassis and body, shedding about 220 pounds in the process.

While the proportions are still those of a classic rear-drive sedan, with the long hood and relatively short rear deck, the new model takes on a more “contemporary design idiom,” suggested Gorden Wagener, Vice President Daimler’s head of design, with the clear influence of the wind tunnel, the new C-Class claiming the lowest coefficient of drag in its segment.

The reduced mass, improved aero and other factors are expected to yield as much as a 20% improvement in fuel economy when numbers are finalized, depending upon the engine buyers choose.

(10 Debuts to watch at the 2014 North American International Auto Show. Click Here to see what makes the list.)

American motorists will have two versions to choose from, the C300 4Matic, which is powered by a turbocharged 2.0-liter inline-four making 235 horsepower and 273 pound-feet of torque.  The alternative is the C400 4Matic with a 3.0-liter turbo V-6 bumping the numbers up to 329 hp and 354 lb-ft.  As this suggests, all-wheel-drive is the new standard at Mercedes, with both C-Class models sharing the maker’s 7-speed automatic. 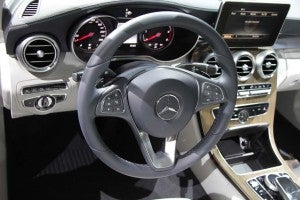 The 2015 C-Class gets a new interior that one reviewer described as "two leaps forward."

Inside, there’s a new center console designed to open up the compact interior, and a free-standing center display that can be fitted with either a 7- or 8.4-inch LCD screen.  There’s a new mix of more elegant metals and “organic” materials.

From a tech standpoint, the maker appears to be trying to address long-running concerns about its COMAND infotainment system with an “innovative” touchpad controller that will permit a motorist to operate basic functions through finger gestures. The new system also will provide haptic – or touch – feedback when using the touchpad. There’s also a new head-up display option.

The high-tech push is apparent everywhere.  There will be three suspension options, for example, including the first air suspension offered in a Mercedes C-Class, and there are even two LCD headlight upgrades above the standard halogen lamps.  The new 2015 sedan will even feature a GPS-synced climate control system that will shut off the outside vents when the car enters a tunnel.

Among the new Intelligent Drive features available on the 2015 C-Class there are – to keep it alphabetical — Active Park Assist, Adaptive Brake Assist, Attention Assist, Brake Assist System Plus, Collision Prevention Assist Plus, Distronic Plus with Steering Assist, and Enhanced Active Lane Keeping Assist.  And in some markets, Mercedes will offer a 360-degree camera and Traffic Sign Assist with Wrong-Way Alert. 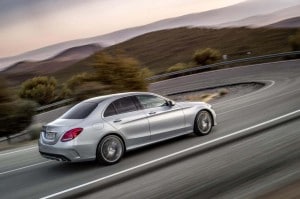 Mercedes initially plans to bring over two turbocharged versions of the new C-Class.

Mercedes is hoping the package will appeal to buyers who might otherwise be drawn to the new CLA coupe-like sedan – which is currently one of the hottest products on the American market, cannibalizing sales of the C-Class.

The CLA starts at less than $30,000, though data tracked by Kelley Blue Book suggests the typical model is leaving the dealer lot closer to the mid-$30,000 range once options are factored in. “or at roughly the same price as the outdated C-Class generation,” noted KBB analyst Karl Brauer, who said he expects to see a “bump in the new C-Class price…to distance it from the CLA.

Don’t be so sure MBUSA CEO Cannon cautioned, noting “this segment is too competitive to be raising our price willy-nilly.” It’s likely the 2015 model will be a bit more expensive when it reaches U.S. showrooms late this coming summer, but the increase, he promised, “will not be considerable.”

The 2015 C-Class will be the fifth Mercedes model assembled at the maker’s Alabama assembly plant – and will be the first Mercedes passenger car produced in the U.S. since a short-lived partnership with the American-based Steinway company more than a century ago, noted Dr. Dieter Zetsche, head of the Mercedes brand and chairman of its parent Daimler AG.