10 Debuts to Watch at the Detroit Auto Show 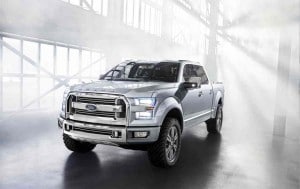 The year gets its big kick-off with the upcoming Detroit Auto Show - where Ford is expected to reveal a new F-150, the production version of this Atlas "aluminum intensive" pickup.

We’ve already gotten some momentum for the New Year thanks to the Consumer Electronics Show in Las Vegas, with automakers rolling out an array of new high-tech features and even a few concept vehicles, such as the Toyota FCV hydrogen fuel-cell vehicle and the Ford Solar Energi, a version of the C-Max plug-in hybrid that can recharge using just the sun’s rays.

But the season’s – arguably the year’s – biggest automotive event is still days away, work crews putting the final touches on the displays down at Detroit’s Cobo Hall for the opening of the 2014 North American International Auto Show.

Don’t be surprised to hear that more than 5,000 automotive journalists from around the world, along with more than 700,000 consumers, will stream through the turnstiles once the show begins.

But whether you get down to the Detroit riverfront or keep track of events from afar, you‘ll have lots to check out, at least 50 new cars, trucks, crossovers and concepts making their debuts. Here are 10 we will be particularly keen to check out:

We could readily continue our list considering all the significant products set to debut at the 2014 North American International Auto Show, including the likes of the new Subaru WRX Sti pocket rocket, the Audi Q3 compact crossover, the Nissan Sport Sedan Concept expected to become the next Maxima, a pair of new BMW performance models, the M3 and M4, and the aforementioned Mercedes-Benz GLA coming to Detroit in muscular GLA 45 AMG trim.

The reality is that whatever your taste and needs might be, there’ll be something new for everyone at this year’s NAIAS.