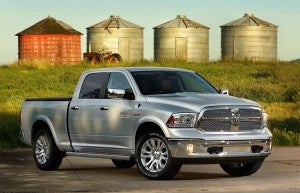 The full-size Ram 1500 pickup has been named Motor Trend Truck of the Year – a doubly significant victory not only considering all the tough competition this year but for the fact that the Ram is the first-ever back-to-back winner of the widely followed award.

Well, that’s not entirely accurate.  The magazine focused its attention this year on the new EcoDiesel V6 version of the Ram 1500, the market’s first light-duty pickup to offer a high-mileage oil-burner under the hood.

“Not only did (the Ram diesel) withstand our rigorous testing, it thoroughly impressed our judges with its vast array of standard and optional equipment, and, most notable, its fuel-efficient, segment-exclusive EcoDiesel V-6. With 420 pound-feet of torque and up to 28 ‘Real MPG’ highway, the EcoDiesel is a true game-changer,” said Motor Trend’s Editor-In-Chief Ed Loh.

A total of nine different vehicles were involved in Motor Trend’s annual truck shoot-out, winners determined by a panel of judges after running the entrants through a grueling series of tests at the 5000-acre Continental Tire Automotive Proving Grounds in Uvalde, Texas.

(Click Here to find out how Hyundai, Toyota and other brands ranked in the latest Consumer Reports Auto  Reliability Report.)

The competitors included the newly redesigned Ford Transit Connect, the Nissan NV200 van, the big Mercedes-Benz Sprinter and the latest update of the Toyota Tundra, as well as two other Ram models, the Heavy Duty pickup and the ProMaster van. But going into the test process many might have put their money on one of two alternatives offered by General Motors.

The Chevrolet Silverado and GMC Sierra full-size pickups have already won a fair share of kudos on their own. And they could yet claim major bragging rights as two of the favorites among 12 vehicles on the Short List for the North American Truck of the Year.  The Ram 1500 diesel did not qualify for inclusion in the NACTOY balloting this year.

The full story of the Motor Trend pick will appear in the magazine’s February print edition. The most recent copy, meanwhile, features the Cadillac CTS, which was named Motor Trend Car of the Year. The 2014 Subaru Forester was chosen the magazine’s SUV of the year.

Reid Bigland, the President and CEO of Chrysler’s Ram Truck Brand, couldn’t miss an opportunity to crow about the truck’s repeat performance. “In a brutally competitive truck industry, the Ram 1500 is the only vehicle to ever win the Motor Trend Truck of the Year award two years in a row, reaffirming the fact that we have the best truck on the road.”

There are seemingly countless Best-of awards these days, even the smallest start-up websites celebrating one category of product or another. But while occasionally controversial, Motor Trend’s picks tend to be among the most closely followed and influential in terms of what consumers actually shop for.