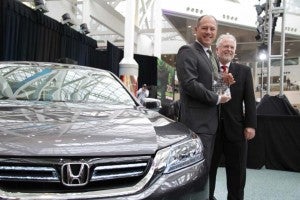 The Honda Accord won Green Car Journal's "Green Car of the Year" honor. The magazine also honors the Green Car Technology of the Year for innovations that help vehicles save energy.

Buyers of new vehicles often consider the awards those cars and trucks have racked up, especially those wanting an environmentally friendly ride. However, it behooves them to look beyond just the simple honors, like Green Car of the Year.

The 2014 Green Car Technology Award will be handed out in late January and should play a role in any research new vehicle buyers are doing as part of their due diligence.

The award, which is given by the Green Car Journal, lauds automakers that come up with the best ideas that lead to vehicles that save energy.

In fact, while the magazine does hand out a “Green Car of the Year” honor – it gave this year’s to the Honda Accord at the Los Angeles Auto Show – it’s not always for a hybrid or some form of electric vehicle. It has a long history of honoring other technologies, especially diesels.

“While new and advanced vehicle models get the limelight, it’s these underlying technologies that make their amazing achievements possible.”

(Honda Accord named Green Car of the Year. For more, Click Here.)

Saving energy may be the key point in all of this. Many folks only think of hybrids or battery electrics when they want a “green” vehicle, but energy-saving vehicles and technologies come in many forms.

(Click Here to see what Americans think of electric vehicles.)

The nominees for this year’s technology award include:

The winner will be honored during the Washington D.C. Auto Show on Jan. 22.