New devices could check your pulse, answer your phone - and find your lost car. 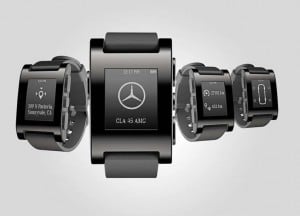 Mercedes will formally reveal its smartwatch at the 2014 CES in Las Vegas next month.

One of the hottest gifts trends this year is the smartwatch, a case of comic book technology coming to life.  The devices are designed to let you quickly check e-mail and even make calls without the hassle of having to pull your smartphone out of your pocket.

With automakers already investing heavily in infotainment systems designed to pair up with your iPhone should it be any surprise that several manufacturers are also looking to launch their own lines of smartwatches?  Nissan recently announced its Dick Tracy-like device and Mercedes-Benz plans to formally introduce its smartwatch at the Consumer Electronics Show in Las Vegas next month.

The Nissan and Mercedes timepieces add some appropriately automotive features, as you might expect.

The Japanese maker’s smartwatch is designed for use in its performance NISMO models and, as that might suggest, will provide a wearer with all sorts of performance telemetry, such as  vehicle speed as well as fuel consumption – as well as the driver’s heart rate. 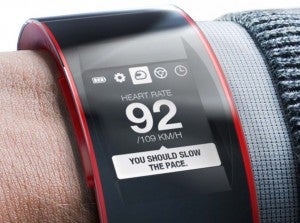 Nissan's smartwatch will be offered with the maker's high-performance NISMO models.

Mercedes adds a variety of functions, depending upon whether you’re in or outside the car.  You’ll no longer have to wonder where you parked because the smartwatch will help you find the vehicle while also alerting you if you forgot to lock the doors.  It will alert you when you’re running low on fuel and, when behind the wheel, advise you of potential road hazards, assist in programming the navigation system and even help program the audio system and access Apple’s voice-activated Siri.

(Coming soon to your car? Advertisers want to reach out through your car’s infotainment system. Click Here for the story.)

The German maker’s device was developed as part of a strategic partnership with Pebble Technology and “acts as a “second screen” for your smartphone,” Mercedes notes in a release, that declares, “the future of the automobile (is) being written in Silicon Valley.”

Indeed, the maker is one on a growing list of automotive manufacturers who have set up research centers in the digital kingdom.

We’ll have to wait for the CES extravaganza to find out more about what Mercedes specifically has in mind for its smartwatch.  It hasn’t said when the slick new device will come to market and what vehicles it might be able to work with.  The maker does hint that some of the features it’s looking at are still as futuristic as what we used to see in a Dick Tracy comic strip. For example, it one day expects its smartwatch would be able to alert you to, say, traffic jams or bad weather by using a vehicle-to-vehicle communications network still in the early development stage.

(Ford rolls out the 10 millionth vehicle equipped with Sync. Click Here for more.)

Nissan also hasn’t set a hard date for release, though it appears to be closer to production than Mercedes with the smartwatch it hopes to offer to buyers of such high-performance NISMO models as the GT-R, Juke and 370Z.

It will be offered in several color combinations, including NISMO red and black. And it will use a Bluetooth link to connect with the vehicle, getting about 7 days use per charge. Nissan says it may add new features in the future, including an electrocardiogram function – apparently to let you know if your new car is simply too hot to handle.