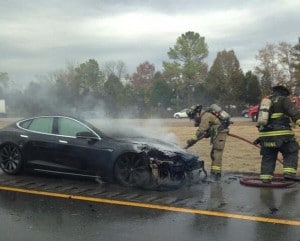 Another Tesla Model S battery sedan has caught fire, the third such incident in six weeks, and an event that is contributing to the California carmaker’s sudden stock price plunge.

Ironically, the incident occurred in Smyrna, Tennessee, according to the Tesla Motors Club website, the same town where Nissan produces its own battery-electric vehicle, the Leaf.

Tesla officials say they plan to immediately investigate the fire which appears to have occurred following a collision involving the Tesla. Two other Tesla vehicles have suffered fires since late September, and the latest incident could raise new concerns about the safety of the lithium-ion technology used by Tesla and other battery-car makers. 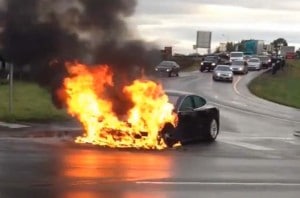 “Our team is on its way to Tennessee to learn more about what happened in the accident,” Tesla spokeswoman Elizabeth Jarvis-Shean said in a statement. “We will provide more information when we’re able to do so.”

The automaker said it appeared that the latest fire was the result of an accident and that no one was injured. A report by the Reuters news service quoted a police dispatcher in Smyrna indicating “There was extensive damage” to the Model S that appears to have been caused by metal road debris somehow entering into the vehicle’s engine compartment.

That would be a similar scenario to what occurred with the first reported Tesla Model S fire which occurred in a Seattle suburb in late September. Following a company investigation, CEO Elon Musk claimed the incident actually validated the design of the battery-car as that fire – caused when a chunk of metal penetrated the battery pack’s armor – was contained within a section at the front of the vehicle. An onboard warning system advised the driver to park and exit before the fire erupted.

(Tesla announces it’s in the black – sort of. Click Here for more on its Q3 earnings.)

Noting there are more than 100,000 fires annually involving conventional gas-powered vehicles, Musk wrote in his blog that, “For consumers concerned about fire risk, there should be absolutely zero doubt that it is safer to power a car with a battery.”

Whether motorists – or investors will feel quite so confident after the report of a third fire in six weeks remains to be seen.  What is clear is that Tesla has been taking a hammering in the stock market, its shares plunging from a late-September peak of $194.50 to as low as $140 in Thursday trading – though shares began to rebound in late-morning trading.

(Tesla one of the hottest products in America’s wealthiest neighborhoods. Click Here for the story.)

The California start-up declared a $16 million net profit, though that figure was based on adjusted accounting procedures. Using more generally accepted guidelines, known as GAAP, Tesla would have sunk $38 million into the red.

The numbers were actually a bit better than many analysts had predicted, but during the call CEO Musk warned that Tesla is having trouble meeting demand for the Model S – and is diverting some cars from U.S. showrooms to meet demand in Europe where the company is just setting up a distribution network.

The big problem is a shortage of the car’s lithium-ion battery packs. Tesla recently expanded its deal with supplier Panasonic but won’t begin to receive a significant increase in batteries until next year.

There has been little indication consumers were worried about the implications of Tesla’s first two battery fires. It remains to be seen whether the third incident will start raising concerns that could lead some potential buyers to steer clear of the maker’s showrooms.

As for investors, there are signs that some of the recent downturn has been driven by short-sellers. And while Barclay’s Johnson has set a target price of just $141 – nearly 30% below the peak, at least some analysts are running counter to the latest gloom-and-doom mindset.

Elaine Kwei, who follows Tesla as an analyst for Jeffries, issued a more upbeat assessment following Tesla’s earnings announcement. The company has made “remarkable progress,” and met “tremendous milestones” since the Model S was launched in July 2012, she wrote, confirming her view of Tesla stock as a “Buy.”

As shares continued plunging Thursday, however, it seems like investors weren’t listening.