Chevy Takes a Load Off With Silverado Cheyenne Concept 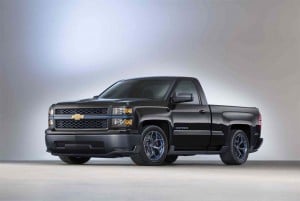 They’re big, they’re bad, but do they have to be quite so heavy? That’s a question a lot of folks are asking about full-size pickups, especially in light of the tough new fuel economy standards the auto industry will be facing over the next decade.

Ford is reportedly ready to show what can be done when it reveals the next-generation F-Series early next year, the big truck expected to migrate to an aluminum-intensive platform and body that could reduce mass by as much as 750 pounds or more. And while Chevrolet took a more conventional approach with its new 2014 Silverado, the maker is also looking at ways to put the big truck on a diet.

Which brings us to the Chevrolet Silverado Cheyenne concept truck that will be making its debut at the SEMA Show in Las Vegas this week.  The prototype makes extensive use of lightweight materials – primarily carbon fiber – to trim 200 pounds off its 4,503-pound production stock mass.

“Lightweighting is a time-honored method of making the most of a vehicle’s performance which Chevrolet has demonstrated time and again with vehicles like the original 2001 Corvette Z06 and the 2014 Camaro Z/28,” says Chevrolet’s Chris Perry in a statement. “And like those vehicles, the Cheyenne complements its lower weight with more horsepower.”

You’ll notice the word, “performance,” in Perry’s comments.  While future full-size pickups will almost certainly have to adopt lightweighting strategies to meet the imminent increases in the U.S. Corporate Average Fuel Economy, or CAFE, standards, there’s an added benefit.  Lower mass also means improved performance, whether launching off the stoplight or pulling a heavy trailer.

(Hyundai rocketing into SEMA with 1,000 hp Genesis Coupe. Click Here for the story.)

Chevy rounds out the Cheyenne package with a 6.2-liter EcoTec V-8 that churns out a hefty 420 horsepower and 460 pound-feet of torque.  That’s a full 65 hp and 77 lb-ft over the stock Silverado’s 5.3-liter V-8.  To that, add a Borla performance exhaust that just seems perfect for the SEMA show crowd.

To trim all that weight, Chevy engineers adopted a carbon fiber tailgate, inner cargo box and bumpers.  The front bumper includes race-style ground effects, while the tailgate gets an integral spoiler. The show truck also gets carbon ceramic Brembo brakes adopted from the track-ready Camaro Z28.  That move alone saved more than 20 pounds, according to Chevy.

(Getting wild, weird and wacky at the Tokyo Motor Show. Click Here to check out some of the strangest concepts ever to make it onto an auto show stage.)

But inside, Cheyenne continues the racing theme with Recaro wheels and a flat-bottom steering wheel like the one in the Camaro ZL1.

While Chevy boss Perry reminds us that the Silverado Cheyenne “is only a concept right now,” he quickly adds that, “we are continually exploring new ways to give Silverado customers more.”

(GM ready to take on all comers in truck segment. Click Here for the story.)

By the way, if the name, Cheyenne, seems familiar you have a good memory.  It was first offered as a Chevy truck premium trim package back in 1971 and then reappeared as a 2003 concept truck.