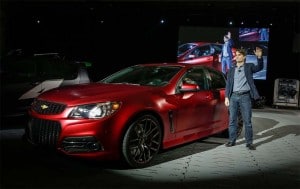 With the SEMA Show set to open its doors in Las Vegas, automakers are rolling out a wide range of concepts – and even a few production vehicles.  Chevrolet has been trickling out previews of some of the special models it will have on display at the Las Vegas Convention Center, and now says it will reveal nine special performance models, in all.

We already offered a close-up of one of these, the Chevrolet Silverado Cheyenne Concept, a special, lightweight version of the full-size 2014 pickup that gets the added benefit of a new 6.2-liter V-8. But the Cheyenne will have some competition drawing crowds to the Chevy stand from an assortment of other models, including the COPO Camaro, the Suburban Half-Pipe Concept, and even the Brad Paisley Signature Silverado bearing the country store’s logo – and whopping 22-inch wheels.

For those unfamiliar with the SEMA Show, it’s the annual aftermarket extravaganza put on by the Specialty Equipment Marketers Association, and manufacturers like Chevrolet have turned it into a showcase not only for the brand but the huge array of accessories that can transform a mundane sedan or pickup into a unique expression of a buyer’s personality. 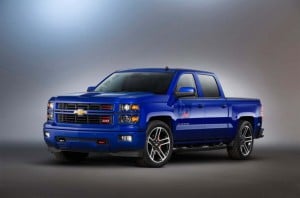 For country fans, they can release their inner Brad Paisley with a Chevy Silverado that’s been dropped two inches, shod with 22-inch wheels and given a country kick in the cabin with blue suede and leather seats and a Kicker subwoofer that can really keep time to his tunes.

(Chevy cuts the weight — adds a big 6.2-liter V-8 — to its Silverado Cheyenne Concept. Click Here for a closer look.)

Tony Stewart also teamed up with Chevy on another Silverado project, this time using an LTZ Z71 model lathered in Dark Tarnished Silver paint, with smoked head and taillamps, riding on 22-inch wheels and given some distinctive graphics to make the Tony Stewart Concept a real stand-out.

Chevy is revitalizing its entire truck line-up, top to bottom, and that includes new versions of the Suburban and Tahoe SUVs, so no surprise we’ll see customized versions roll into SEMA, including the Suburban Half-Pipe Concept. 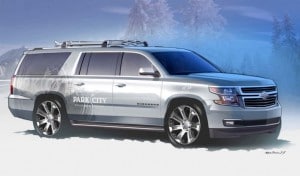 Explains the maker, “The 2015 Suburban Half-Pipe Concept is equipped to haul adventurers and all their ski and snowboard gear to the slopes.”  The SEMA Show SUV gets a special roof rack and crossbars to mount skis and other equipment along with Chevrolet Accessories 22-inch wheels and center caps for a more distinctive appearance. And to keep passengers amused on the way to the slopes, there’s a BlueRay rear-seat entertainment system.

The Tahoe Black Concept seems better suited to more formal situation, with a lowered stance and, says Chevy, an “all-black profile (to) lend an aggressive appearance.” That means blacked-out exterior trim, Chevrolet Accessories 22-inch wheels custom-painted dark gray, tinted headlamp lenses and tinted windows all around, along with an aero-style body package. Inside, the Tahoe is trimmed in black leather with Carbon Flash Metallic trim accents. 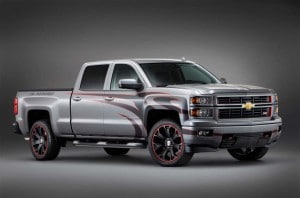 There’ll be several concepts showing the potential Chevy trucks offer to police and firefighters, and the maker intends to show off the towing capabilities of the 2014 Silverado with an HD Dually tow vehicle pulling the all new COPO Camaro into the Las Vegas Convention Center.

(Mopar SEMA concepts bridging the gap between factory and aftermarket. Click Here for the story.)

Meanwhile, Team Chevy driver Jeff Gordon helped kick off the annual aftermarket show by driving in with a concept version of Chevy’s new SS Performance Sedan, this one finished out with a custom satin pain job, customized 20-inch wheels, a carbon fiber spoiler and special custom grille. Inside, it features speal perforated suede seats, embroidered headrests, a racing-style flat-bottom steering wheel and, perhaps most importantly, a 6.2-liter LS3 V-8 under the hood making 415 horsepower and 415 lb-ft of torque.