US Traffic Fatalities Fall Sharply During 1st Half of 2013 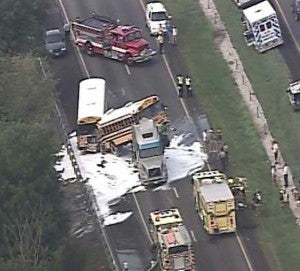 Experts credit better safety technology for at least some of the reduction in highway fatalities.

U.S. traffic deaths fell by 4.2% during the first half of 2013, according to preliminary figures from the National Highway Traffic Safety Administration, reversing an unexpected upward surge the previous year.

The federal safety agency still estimated that 15,470 people died in all forms of motor vehicle crashes between January 1 and June 30, though that was down from the 16,150 fatalities reported during the first half of 2012. Some states, such as Ohio, are on track to have their lowest death tolls since record keeping began on a per-mile basis.

Measured in terms of fatalities per 100 million miles traveled, the rate for the first six months of the year dipped to 1.06, down from 1.10 fatalities during the first half of 2012.

There had been some concern that the total fatality count might rise as the economy recovers, a traditional pattern that reflects more Americans taking to the road – particularly during the dangerous rush hour periods.  Government and industry officials are studying the surprising reversal to see what has contributed, instead, to the decline in deaths.

Whatever the reason, the preliminary report was taken as good news.  Highway deaths had been on a sharp decline for nearly a decade before suddenly reversing course in 2012. Last year, 33,780 people were killed on U.S. roads, an increase of 4.4%.

(Are we approaching an era of “accident-free driving”? Click Here to find out.)

There are some worrisome exceptions to the downward trend, however. As more and more states have eliminated motorcycles mandatory helmet laws, fatalities have been on the rise. In Michigan, total motorcycle deaths rose 18% in 2012, even though the law was changed only in April. NHTSA has not provided a breakout of motorcycle deaths for the first half of 2013.

(Technology joins the fight against distracted driving. Click Here for the story.)

Even the latest overall highway fatality numbers concern safety advocates. But new technologies could help bring the numbers down even faster, proponents contend.

A number of automakers, including Nissan and Volvo, have set goals of eliminating all highway deaths in their vehicles, though when that would become practical remains to be seen.