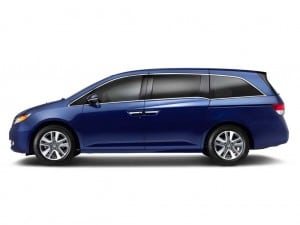 The 2014 Honda Odyssey may be the "most American" vehicle in the U.S., according to NHTSA.

New vehicle buyers consider many factors when making a purchase, including price, fuel economy, technology and, in some cases, where their top car or truck choice is made.

Potential buyers looking for an “American-made” vehicle face a tough task. In fact, according to recently released information from the National Highway Traffic Safety Administration, buying a vehicle from the traditional Detroit Three automakers – General Motors, Ford and Chrysler – is not certainly not a guarantee of buying most “American” vehicle in a given segment.

Using information from Part 583 of the American Automobile Labeling Act (AALA), buyers can figure out that while the Ford Taurus may seem like a great American purchase, it’s the Toyota Camry that takes the “most American” title with 75% of its parts coming from North America (the United States and Canada). The Taurus comes in at 65%.

The act requires manufacturers to divulge the content levels on all new vehicles using a label with the U.S./Canada content percentage and related additional information must be displayed on these vehicles up to the time of first retail sale.

In fact, if you break the vehicles down by segments, GM takes the top honors in four (sports cars, large vans, crossovers and SUVs) and tied for a fifth (luxury cars), while Ford takes only the hybrid category. No Chrysler vehicles were listed for 2014, but its top 2013 vehicle was the Dodge Grand Caravan with 80%. The company’s lowest, not surprisingly, was the Fiat 500 with just 21%.

Toyota took three top spots: sedan, compact car and trucks, although Ford’s rankings were not available on the form so the F-Series could conceivably be the top dog in the ranking. Last year, it claimed 75% of content from the U.S. and Canada.

Below are the rankings as compiled by the website Wall Street Cheat, using the NHTSA figures and categories it developed:

The luxury car segment was perhaps the closest race with the Lincoln MKT, Cadillac CTS and Acura RDX all coming in with 70% North American-made components. However, the final assembly for the MKT is in Canada, while the Acura and Cadillac are both assembled in the U.S.

The AALA defines a passenger motor vehicle as a motor vehicle designed to carry not more than 12 persons with a gross vehicle weight rating not greater than 8,500 pounds and includes multipurpose passenger vehicles and light duty trucks. It does not include a motorcycle or a truck not designed primarily to carry its operator or passengers, i.e., a delivery truck.