Jeep rocks out with new entry-model. 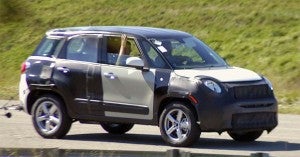 If you’re a rock fan, the name might bring to mind an old song by the British band T. Rex.  Others, might recall the 1998 concept vehicle that introduced the name Jeepster. What sort of tune you’ll sing likely will depend upon your reaction to this spy shot.

The Jeepster name actually has been around for some time, fans of the off-road brand will recall, dating back to the Willys-Overland Jeepster from 1948, a model described as the auto industry’s last true phaeton design.  The name was revived in 1966 on the AMC Jeepster Commando. And, what with the Cherokee badge returning to the Jeep line-up, it appears the maker is ready to dig even deeper into its archives.

Designed to take the Jeep brand even more down-market than the current Compass model, this concept is, at least for now, being referred to internally as the Jeepster, though it remains to be seen if the name will stick when it goes into production.  But one thing seems certain, the concept suggests that Jeep is continuing a dramatic design shift that comes as part of parent Chrysler’s marriage to the Italian automaker Fiat SpA. 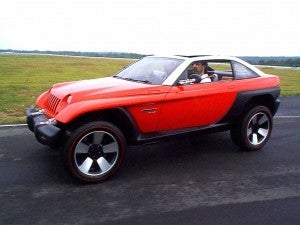 We got a first look at this new direction with the unveiling of the 2014 Jeep Cherokee.  The now-delayed, crossover-based utility vehicle is without doubt the most polarizing model Chrysler’s off-road brand has introduced in years.  But the Jeepster could generate even more controversy.

That is, of course, depending on what final shape of the new Jeep model takes.  For the moment, as this spy shot reveals, the base vehicle for the development of the Jeepster is a Fiat 500L.  It’s the same approach Chrysler employed in developing the Dodge Dart which, in turn, uses a modified version of the Compact U.S. Wide platform found under the skin of the Alfa Romeo Gieulietta.

In the case of the Jeepster, the new model will be based off the new Small U.S. Wide architecture, the same platform underpinning the 500L. And like the final version of the Dart, which is wider and longer than the Giulietta sedan, the dimensions of the Jeepster also will be somewhat different from the Fiat people-mover.

Look closely at the Jeepster mule shown here and you see the lengthening inserts on the rear doors. Look even closer and you can spot the insert in the roof, just above the rear door. Also note that there is an extra side window to the rear of the back door that contributes to the lengthening.

(Click Here for a first drive of the 2014 Jeep Cherokee.) 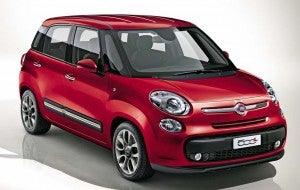 Jeepster shares the basic Small US Wide architecture first seen in the form of the 2014 Fiat 500L.

Up front, under the black camo is the trademark seven-slot Jeep grille. Later, the real Jeepster sheet metal will appear below heavy, full-vehicle camo as the car continues development cycle.

Whether the final design will mimic the classic, boxy Jeep look or adopt the more polarizing look of the new Cherokee, with its split front lamps and creased grille, remains to be seen. Clearly, Jeep designers are looking to see the market’s reaction to the new Cherokee and could make at least some tweaks to Jeepster’s appearance in response.

In whatever form it takes — and whatever name it adopts — the new Jeepster will target an expanding list of new, downsized crossovers, including the Mini Countryman.

As you would expect, the Jeepster will all but certainly go front-drive but also offer an all-wheel-drive system that is expected to borrow from technology developed for the Fiat family.  There’s no word of a more off-road-capable model, ala the Jeep Cherokee Trailhawk.

Power will come from a 1.4-liter turbo in the U.S. market, while several smaller options, including a diesel, will likely be available in Europe.

Expect to see the production model – whether or not it retains the Jeepster name – reach showrooms about a year from now.