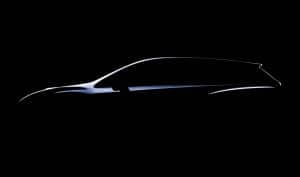 A sleek look for the clunky-sounding Subaru Levorg Concept coming to Tokyo next month.

It’s not the sort of name that rolls easily off the tongue, perhaps, but Subaru is hoping folks will bite when it rolls out the Levorg concept at the Tokyo Motor Show next month.

The Japanese maker explains that the name given this sport tourer prototype is shorthand for “Legacy,” “Revolution” and “Touring.” But what likely will matter is the way the sheet metal looks when it rolls out in mid-November, and the teaser images suggest this is not the classic Subaru box design.

The good news is that the Fuji Heavy brand will also roll out an assortment of other concept, including the 3-row Crossover 7 Concept and the Cross Sport Design Concept, the first of which could give a hint of the model planned to replace the distinctly unloved Subaru Tribeca, which will finish up its largely unnoticed run at the end of the 2014 model-year.  We’ll also see an updated version of the Viziv hybrid concept first shown at the Geneva Motor Show last March. 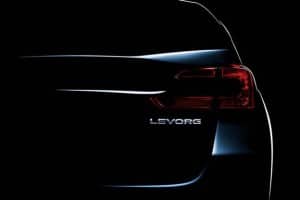 The Levorg will be one of an assortment of new concepts Subaru has on tap for the Tokyo Motor Show.

Subaru suggests the Levorg “features an exquisite and stylish design with a sports car feel. It offers the best in driveability, safety and environmental friendliness, combined with the practicality of a touring car.”

(Subaru snuffs out the Tribeca. Click Here for more.)

This sport tourer will be powered by the new 1.6-liter direct injection turbo version of Subaru’s familiar four-cylinder boxer engine. And it will be equipped with a variety of high-tech system, including Subaru EyeSight, a camera-based technology that was developed to bring down the cost of such features as Lane Departure Warning and Blind Spot Detection.

The Subaru Viziv Evolution Concept picks up where the original Viziv, shown in Geneva, left off.  The goal says the maker, is “to demonstrate the Subaru brand’s future direction, both aesthetically and technologically.”

(Subaru lands two on the North American Car and Truck of the Year “short list.” Click Here for more.)

The Viziv Evolution shares the new direct-injection turbo boxer engine used in the Levorg, but here the gasoline powerplant is paired through a Lineartronic CVT to a three-motor hybrid system. While Subaru doesn’t provide details, the approach sounds at least somewhat similar to the three-motor system that Honda is developing and will use in a range of Acura models such as the MDX and RLX. One motor will drive the Levorg’s front axle, two the rear.  The system will create what some call a through-the-road hybrid system.

Subaru hasn’t said much about the plug-in hybrid’s lithium-ion battery pack, either, so it’s not clear how many miles it will deliver on a charge.

Among the other technologies aboard the Subaru Viziv Evolution will be what the maker’s release refers to as “an innovative autopilot system.” Whether that means fully autonomous driving, well, we’ll have to wait until Tokyo to find out.

(How did Subaru – and its competitors – fare in the 2013 Consumer Reports auto reliability survey? Click Here to find out.)

Subaru seems to all but anoint the Crossover 7 as its Tribeca follow-on, calling it the “new face in the Subaru line-up.” The three-row, seven-seater is designed to balance the appearance of a go-anywhere ute with a “sophisticated urban look.”

Also on tap, the Subaru Cross Sport Design Concept balances sport and utility in a relatively compact, 169-inch length. The interior layout, the maker says, features an easy access seating system, that should appeal to those who want a trendy urban SUV.