British marque may soon offer as many as 10 different models. 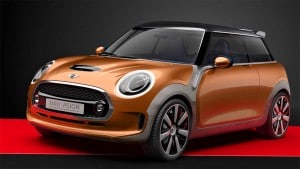 The next Mini hatchback will debut in LA -- the Vision Concept shown here giving a hint of what's to come.

You can be small and still think big.  Just ask Mini, the British subsidiary of BMW that has, in barely a dozen years since its global re-launch gone from a small niche player with a minimal line-up of microcars to a fast-growing brand with a rapidly expanding product mix.

And the line-up will soon grow by as much as 50%, according to the BMW board member who oversees the Mini brand, it seems. The key is the upcoming launch of an all-new Mini hatchback based on a flexible front-drive platform developed in cooperation with the marque Bavarian parent.  In fact, this new “architecture” will soon give BMW a replacement for its 1-Series, the German maker’s first front-wheel-drive offering.

The modern-day incarnation of Mini initially debuted with just the familiar hatchback model, but after generating enough sales to take even its most optimistic executives by surprise, a variety of alternatives began pouring into dealer showrooms, including the four-seat convertible, the Mini Open, a roadster, the five-door Countryman crossover and, all told, a total of seven different models now vying for space in the maker’s showrooms.

But get ready for Mini generation three, which will debut at the upcoming LA Auto Show. “With the new ULK architecture, we currently have in mind eight to 10 models,” BMW board member Peter Schwarzenbauer tells Automotive News Europe.

Exactly what those additional models are, Schwarzenbauer isn’t saying, nor would he confirm whether all current models will be updated. But the British marque is not expected to stray much further from its microcar roots than it did with the launch of the Countryman and the 3-door spin-off of that crossover, the new Paceman.

That said, Mini is looking for opportunities to expand its range of powertrains.  Don’t be surprised to see the maker’s diesel finally show up in the U.S. market once models based on the ULK platform take over. Also in the works, a plug-in hybrid as well as a successor to the Mini E battery-electric vehicle.

Expect to start seeing the new Mini models start arriving in showrooms in the U.S. and Europe by next spring, though it could take awhile to build up inventories.

And, notably, with demand for the British line-up continuing to swell to an order of magnitude beyond initial plans, Mini has gone looking for ways to expand production – something it expects to solve through an alliance with VDL, the contract manufacturer that took over an old Volvo-Mitsubishi plant in the Netherlands.

(Click Here to check out the Mini Vision Concept.)

Specific production plans, says Schwarzenbauer, are” not decided yet in detail but it’s basically additional capacity for us when we meet capacity restrictions at the main Mini plant in Oxford, England.”  The executive adds that, “last year we produced and sold 300,000 units and right now we are expanding that capacity.”

The ULK architecture – Mini’s third-generation platform since being subsumed by BMW – will serve double duty.  The German maker also plans to use it for at least several new models, including the 1-Series and the new BMW X1.  By some estimates, that means the flexible architecture will eventually serve as the foundation of a dozen – or more – products offered by the two brands.