All six new GM offerings make list – more than any other maker.

The 2014 Chevrolet Silverado is one of six GM models to make the NACTOY "short list."

Whatever the polls may say, you have to wait for election day to be sure who’s going to win the big prize. And that goes for the annual North American Car and Truck of the Year balloting which started out with 45 different models in contention – 29 passenger cars and another 16 vehicles in the truck/utility category.

But the 49 U.S. and Canadian journalists who make up the NACTOY jury have held their equivalent of a primary ballot, cutting the original list down to an even two dozen vehicles – and there are a number of surprises in the initial results.

For one thing, there’s not a single Ford Motor Co. model in either category. But cross-town rival General Motors not only dominated the list this year but landed all six of its new 2014 products in the so-called short-list, among the best showings by any maker in the more than two decades since the widely followed North American Car of the Year program debuted. 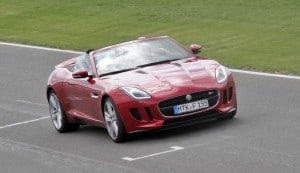 Jaguar is hoping to win with the new F-Type.

The list includes the Buick Encore, Cadillac CTS, Chevrolet Corvette and Chevy Impala in the passenger car category, with the Chevrolet Silverado and GMC Sierra pickups on the truck/utility side.  GM would be among the rare makers to pull off a sweep if it takes both trophies home next January 13th, when the final NACTOY results are announced during the opening ceremonies of the 2014 Detroit Auto Show. Cadillac, meanwhile, would be among an only slightly larger group to take home the passenger car award if the CTS followed last year’s victory by the Caddy ATS model.

A total of 11 automakers have products that have made it to the NACTOY short list this year. The next stage will be the announce of the three car and three truck finalists in December.

Following GM, Toyota has three semi-finalists, as do Hyundai-Kia, if you count the Korean siblings as one manufacturer. The latter brands’ nominees include the Kia Cadenza on the passenger car side and the Kia Sorento and the new long-wheel-base Hyundai Santa Fe in the truck/utility category. Toyota’s entries are the Corolla and Lexus IS sedans and the Toyota Tundra pickup.

Chrysler Group, last year’s other winner, with the Ram 1500 pickup, has just one model that made it into contention at this point, the new Jeep Cherokee.

How are the remaining models playing out among jurors? As one of those 50 journalists, I can’t get too specific about ongoing discussions but GM is clearly impressing the group, on the whole, with a variety of products that show a renewed emphasis on design, functionality and performance. The 2014 Chevrolet Corvette, in particular, seems to have charmed the NACTOY collective based on the reviews members have been filing. And despite some disappointment with the conservative styling of the two GM full-size pickups, their strengths seem to be overcoming that one concern.

Jaguar, meanwhile, has struck a responsive chord with its F-Type, a sports car that many agree is the “spiritual successor” to the legendary E-Type of a half-century ago.  The Range Rover Sport, meanwhile, has delivered some surprises of its own: the new ute is lighter, more fuel-efficient and more comfortable on-road yet actually increased its off-road capabilities.

The downside for luxury models – a list also including the Cadillac CTS, is that NACTOY jurors have a tendency to favor more affordable, mass market models that put more emphasis on value for the money. But Mercedes-Benz might actually benefit from that mindset.

Notably, neither the top-line S-Class nor the mid-range E-Class made the short list cut this year. The maker’s one model that moved to the second round is the new CLA, a compact coupe-like sedan that offers a base price of just $29,990 – less than some mainstream competitors. That approach might also curry favor for the new Lexus IS, a traditionally stodgy model that debuted for 2014 in an all-new and much more emotional skin.

BMW is always a darling of the automotive media and could sway jurors in either category, though there’s not the buzz of prior years for either the 4-Series or X5.

Neither Toyota’s Corolla nor Tundra, have been generating much buzz, either, though the compact sedan is clearly expected to remain a darling in the market where it has long been one of the best-sellers.

Two small Japanese brands, Subaru and Mazda, could prove spoilers as they have been showing how much they can do on relatively modest budgets compared to big-name makers like GM and Toyota, while the Korean twins could also deliver a knock-out punch. Hyundai has won NACTOY’s passenger car trophy twice now, first with Genesis and more recently with the Elantra. But the bigger buzz this year seems to favor the striking styling of the Kia Cadenza.

All sorts of factors, of course, could impact the jury’s final decision, so we’ll get a better sense of who’s going to win when the finalists are announced two months from now.

Here are the remaining nominees: