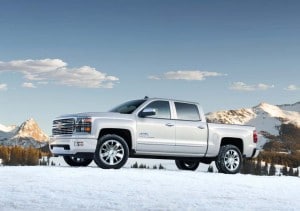 Uphill battle? The success of the new 2014 Chevrolet Silverado could determine whether GM regains the global sales crown.

After slipping back into second place in the global automotive sales race, General Motors appears to be gaining momentum on its Japanese arch-rival and world’s best-selling automaker Toyota.

GM says it sold 4.85 million vehicles worldwide during the first six months of the year, a 3.9% gain over the same period during 2012. The Detroit maker was buoyed by both rising demand in the recovering U.S. market, along with record sales in China which accounted for nearly one of every three cars GM sold between January and June.

If GM maintains that pace for the rest of 2013 it could find itself in a shoot-out with Toyota which last year regained its position as global king-of-the-hill with sales of 9.3 million vehicles. Toyota had hoped to near the 10 million mark this year but it has been lagging behind the overall U.S. market recovery and continues to face problems in China due to an ongoing political dispute between the booming Asian nation and Japan.

GM sales also are running ahead of the tally for Volkswagen AG, the German maker that has set out a goal of being the global industry leader before decade’s end. VW said it sold 4.7 million vehicles worldwide during the first half of 2013 – however, it grew faster than GM, with a 5.5% increase over the same period a year earlier.

The Chevrolet brand dominated the GM sales chart with worldwide sales of 2.5 million during the first two quarters, up 1.4%. Notably, for a brand that has traditionally positioned itself as American as baseball, hot dogs and apple pie, more than half of Chevy’s total, or 1.3 million vehicles, were purchased outside the United States.

The bowtie brand has posted 11 straight quarterly sales increases, in part due to the U.S. recovery, growing demand in China and a long-standing leadership position in Latin America. Chevrolet’s biggest problem was in Europe where it is struggling amidst the continent’s overall market downturn and hoping to regain momentum with new products such as the compact Adam.

“Chevrolet is in the midst of the most aggressive new product rollout in the brand’s history,” said Alan Batey, senior vice president of global Chevrolet. “The continued sales growth around the world is a result of a focused effort to strengthen Chevrolet’s presence in developing markets as well as its relationship with consumers by offering the right products, technologies and world-class customer service.”

The U.S. remained Chevy’s single largest market, accounting for 1.02 million sales, and an increase of 5.6%, during the first half of this year.  Curiously, Chevy – like its Detroit rivals – has seen demand surge at both ends of the product spectrum, with double-digit jumps in small car and pickup sales.

“We’re seeing this ongoing shift to truck/SUV sales in the U.S., and that’s benefitting automakers like GM more than rivals Toyota and Volkswagen,” said Karl Brauer, automotive analyst with Kelley Blue Book.  “It feels like a lot like 2004, when truck and SUV sales allowed the domestic automakers to rule the sales and profit charts. It’s somewhat surprising given the price of fuel is almost three times what it was back then, but Americans have apparently adjusted to $4-a-gallon gas.”

Chevrolet’s second-largest market proved to be China, where the brand sold 322,000 vehicles, a 6.1% increase.

Indeed, despite some signs of a slowdown in the Chinese economy, the fast-growing market actually accounted for more of GM’s overall sales during the first half of the year than the U.S. when the maker’s Chevy, Buick, Cadillac and Opel brands – as well as Chinese joint ventures such as Wuling and Baojun – are included.  In all, China generated 1.6 million sales for GM during the period, a 10.6% increase it announced last week.

But the U.S. maker reported significant increases in a number of other emerging markets, such as Brazil and Mexico. For Chevy, only one of its top five national markets, Russia, was down for the first half, by 16.1%.  The brand also reported a 6.5% decline in Europe.