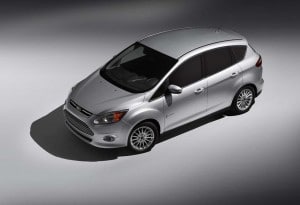 Ford hopes to reduce concerns about the real-world mileage of hybrids like its C-Max people-mover.

Ford has come up with a software update it will offer owners of more than 77,000 of its hybrid vehicles that it says should reduce the “variability” of the fuel economy they’re getting.

That’s a cautious way of saying the fix should boost mileage that, in many cases, has been lagging well behind the figures found on the Munroney, or window, stickers of a number of Ford gas-electric models, such as the new Fusion and C-Max Hybrids. The shortfall has generated sharp criticism – and at least several pending lawsuits.

“We want satisfied customers,” said Raj Nair, Ford’s director of Global Product Development, adding that the maker “determined we could bring (fuel economy improvements) to vehicles already in the market.” 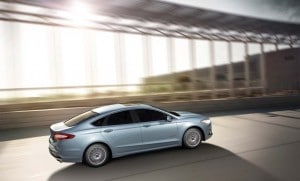 The 2013 Ford Fusion Hybrid is rated at 47 mpg Highway, but Consumer Reports claims it gets about 21% less in real-world driving.

The issue of hybrid mileage is neither new nor unique to Ford.  Since the American debut of the original Toyota Prius more than a dozen years ago motorists have reported wide swings in terms of what they get in real-world driving conditions as opposed to the vehicles’ EPA-approved mileage.

“Mileage may vary” has long been a fact of life for motorists, even with traditional gasoline-powered vehicles, but that’s especially true of hybrids which are particularly sensitive to driving styles and even weather conditions. Cold weather is especially tough on battery-based vehicles.

Honda has faced a number of lawsuits over mileage of models like the Civic Hybrid – including one that landed in California small claims court last year, generating national headlines.

The Environmental Protection Agency has made several adjustments to its mileage testing procedures, most recently in 2008, and has been particularly focused on fixing the hybrid problem. Part of the challenge is that all vehicles can be tweaked to maximize numbers in the EPA test process, but that’s especially true when it comes to a product that switches back and forth between gas and electric propulsion.

Ford has been accused of taking things a bit too far to get numbers, like the 47 City/Highway/Combined rating for its Fusion Hybrid, which it has advertised heavily.

A series of tests by influential Consumer Reports magazine found that the 2013 Fusion and C-Max Hybrids fell 17 and 21% short of their stated numbers, respectively.

In May, a Massachusetts Ford C-Max owner, Marianne Cibeu, filed for a federal class action lawsuit alleging she was getting only 32 mpg. “Plaintiffs purchased a Fusion Hybrid or C-Max Hybrid, only to be stuck with under-performing, less valuable vehicles that inflict higher fuel costs on their owners,” the lawsuit alleged.

Nair and other Ford officials declined to discuss the lawsuits during a late Tuesday news conference, but the product development chief insisted that all hybrids are subject to “variability,” but that consumers themselves can take appropriate steps to boost fuel economy.

Among the steps Ford announced, the maker will launch an app letting hybrid owners share tips on how to maximize mileage.

But the maker also plans to reprogram the microprocessors controlling the hybrid powertrains on vehicles like the C-Max.  Among other things, that will:

Ford officials declined to estimate how much the software fix might add to the mileage of the typical hybrid, Nair only repeating the goal of reducing “variability.”

The fix will be built in the software for all 2014 Ford hybrids. As for existing vehicles, the maker plans to begin notifying 77,000 hybrid owners immediately and it says the software update will be made at no charge, though owners will likely need to set aside about half a day in the shop.

The Detroit maker has already talked to the EPA about its fuel economy fix and Nair said Ford would support efforts by the federal agency to find a more effective way to measure real-world mileage than now appears on automotive window stickers and in the ads that have become seemingly omnipresent in today’s mileage-minded U.S. market.

Ford clearly doesn’t want to see consumers dismiss its fuel economy claims. It has increased its hybrid sales numbers about fivefold since last year and is taking market share away from Toyota – which saw its Prius sales dip by around 5% since the beginning of this year.