The Chevrolet bowtie circa 1913.

For a mass-market brand, Chevrolet has a rather formal logo.  Exactly how General Motors’ largest brand came up with its bowtie emblem is a matter of long-running debate. But what’s clear is that the logo is about to celebrate its 100thanniversary.

According to GM, the bowtie first appeared in the October 2, 1913 edition of The Washington Post in an ad advising car buyers to “Look for this nameplate.”

The brand itself had been registered two years earlier – Chevy celebrating its own centennial in 2011 – by the Swiss émigré Louis Chevrolet. The son of a watchmaker, he left his home in the Jura Mountains in 1898, at the age of 20, to pursue a career in racing and auto manufacturing.

Chevrolet went on to partner with William C. “Billy” Durant, the founder of General Motors, but the two soon had a falling out and in 1915, the man who gave the brand his name left for new ventures.  His racing career petered out, he lost almost everything in the 1929 stock market crash and, ironically, Louis Chevrolet’s final job was on an assembly line building – you guessed it – Chevrolets.

But where did the bowtie logo come from? 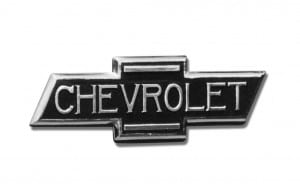 The Chevy logo had changed little by 1936.

Over the past century there has been plenty of debate and countless stories have appeared with often wildly contradictory explanations.

Credit unmistakably goes to Billy Durant.  But did he come up with its on his own?  Or did it come to him during an overseas trip?

According to one of the most popular tales, Durant and his wife were traveling through France when he spotted a bowtie-like image on the wallpaper of one of their hotel rooms.  It struck a resonant chord.  He tore off a small square, brought it back to the States and eventually transformed it into the familiar Chevrolet logo.

Durant himself had a stormy tenure at GM – or tenures.  He founded the maker, lost control and left, then raised the capital to mount a brief takeover before being ousted by investors for good – and winding up running a bowling alley in Flint, Michigan, where Durant’s family once made buggies and carriages.

In a 1968 interview, his widow, Catherine, said the design actually came to Durant while reading newspaper in their hotel in Hot Springs, Arkansas during a 1912 vacation.  Her late husband, she recalled, proclaimed, “I think this would be a very good emblem for the Chevrolet.”

(From Swiss watchmaker’s son to founder of Chevrolet. Click Here for more on Louis Chevrolet and the company he created.)

The bowtie on a 2014 Chevrolet Camaro.

But Durant’s daughter Margery had a very different recollection published in her 1929 book, “My Father,” insisting he had been doodling designs during dinner.  “I think it was between the soup and the fried chicken one night that he sketched out the design that is used on the Chevrolet car to this day,” she wrote.

Ken Kaufmann, a historian and editor for The Chevrolet Review, has spent a significant amount of time trying to sniff out the real story and he gives credence to Catherine Durant’s long memory.  In fact, he thinks he knows precisely what paper Durant was reading, the November 12, 1911 edition of the Atlanta Constitution.

It just happens to contain an ad for the Southern Compressed Coal Company which produced a refined fuel known as “Coalettes.  And its logo was a slanted bowtie not unlike what every Chevrolet to come would soon begin wearing.

The origin of the original Dodge logo, which resembles a 6-sided Jewish star, or Mogen David, remains uncertain.

Automotive logos have a wide range of sources.  There’s Henry Ford’s name in a blue oval.  Cadillac has used numerous variations of the coat of arms for Anthone Laumet de La Mothe sieur de Cadillac, founder of the City of Detroit.  Both have been around for more than a century.  Other logos have come and gone or undergone such dramatic changes as to no longer be recognizable in original form.

One of the other automotive mysteries concerns the original logo adopted by the Dodge Brothers.  It resembled the traditional six-sided Jewish star, or Mogen David.  One of the more popular – though not necessarily accurate – explanations is that it honored the Jewish bankers who were the only ones to lend money to the new Dodge car company.  They allegedly wanted to spite the virulently anti-Semetic Henry Ford.

One thing’s certain, the Chevrolet bowtie is routinely listed as one of the most recognizable brand emblems in the U.S., if not the world. And it clearly cost a lot less – even adjusting for inflation – than the $1 million Pepsi spent to redesign its logo in 2008.