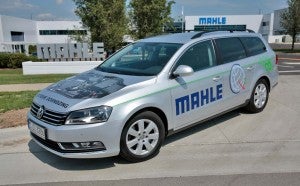 Mahle's modified VW is being used to test the new downsized engine technology.

A German manufacturer best known for its heavy duty truck engine components could re-write the rules when it comes to passenger car powertrains.  The company is the Mahle Group, and it’s presently showing off a “demonstration vehicle” with an experimental   three-cylinder 1.2-liter single turbocharged gasoline engine that promises to meet very tough emission regulations while maintaining performance in mid-sized cars.

The German company’s powertrain subsidiary is barnstorming its experimental car, dubbed a “downsizing demonstration vehicle,” to U.S. vehicle manufacturers with the objective of gaining research—not engine-production—contracts.  But longer-term its design could provide the industry a significant alternative to conventional engine designs. 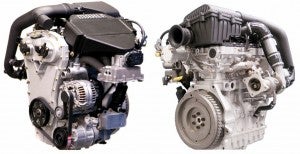 Mahle manufactures many engine components such as connecting rods, heads, camshafts, cylinder sleeves, etc. in plants around the world.  It’s been a Tier One supplier to European automakers, including Mercedes and BMW and is showing off its demo vehicle wrapped in a VW Passat wagon model not marketed in the U.S.

The powertrain in the demo vehicle is fully operational, designed to meet all presently known government regulations, based on the European test cycle – though that is different from the testing employed by America’s EPA.

But while the numbers might change a bit when put through the U.S. test cycle, the tiny engine has been able to deliver 163 horsepower with outstanding highway driving torque, producing 40-plus mpg in Euro highway cycle fuel economy (5.8 liters per 100 km) with a 30% reduction (to 135 grams per km) in carbon dioxide output.

Bernie Porter, a technical specialist at Mahle’s Powertrain operations, describes this Mahle engine as a logical next step from what Ford Motor Company has done with its 1.0-liter Ecoboost engine that will be added to the U.S. Fiesta option list for 2014.  Mahle Powertrain compares this engine in the 3,500-lb. Passat with either the current 1.8-liter or 2-liter VW gasoline engines.

Among other powertrain products under development at Mahle is a 2-cylinder “compact range-extender” for hybrid and battery-electric vehicles.  According to Mahle Powertrain, field research shows the typical motorist’s driving patterns do not require all the battery capacity typically specified in today’s juicers.   The range-extender is designed to optimize this discovery in order to downsize batteries, thus reducing cost.

This Mahle plug-in development is designed to work in a “C-sized” vehicle such as Camry, Accord, Fusion or Malibu.  Again, the marketing effort by the German company is aimed at securing research contracts at this state of the development.  Later it might evolve into component production deals.

Incidentally, Mahle recently completed the acquisition of 51% of another major German manufacturing company, Behr.  It has a joint venture with Bosch, among other such cooperative operations, all internally financed.