Acura Places Bet on China – But Remains Focused on U.S. 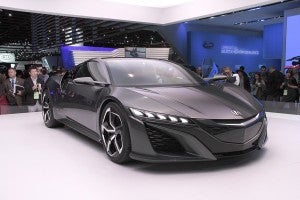 Honda will revive the Acura NSX for 2015.

But Acura officials insist that even as they look for other opportunities abroad, they are increasing their focus on what has traditionally been their largest market, the United States.  They’re backing that up with an assortment of new products that will soon include an all-new version of the once ground-breaking supercar, the Acura NSX.

Honda plans to invest about $70 million on its flagship plant in Marysville, Ohio to get ready for the re-launch, late next year, of the revived NSX. The sleek, 2-seat sports car was once a showpiece of Asian automotive prowess and lent a halo to Honda’s Acura division, the first Japanese brand to target the demanding luxury market.  But after a 15-year-run, the NSX was pulled from production in 2005 a move that coincided with Acura’s sharp downturn, leading some to wonder whether it could survive, especially as the automotive market plunged into recession. 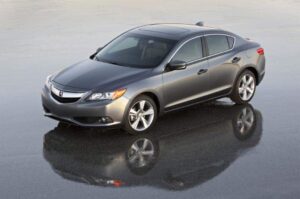 Despite mixed reviews sales of the Acura ILX have been gaining momentum.

The decision to bring the supercar back – and to power the next-generation NSX with a cutting-edge hybrid drivetrain – highlights Honda’s push to rebuild the brand, a move backed by a number of new and updated models, including the all-new RLX flagship sedan.

“We witnessed the rise and fall of Acura sales over the last decade,” says Mike Accavitti, who joined American Honda as its Chief Marketing Officer two years ago and has since focused much of his attention on the luxury brand. “We began to realize we had to clarify the brand direction which was, over time, diluted.”

While Acura was the first Japanese luxury brand when it debuted in 1986, it has become a weak second-tier player compared to Toyota’s Lexus brand, never mind dominant European highline marques Mercedes-Benz and BMW.

The struggling Japanese maker’s challenge has been to reposition itself with new product and get back on the radar screen of potential buyers who had plenty of other options to choose from.  While two concept versions of the NSX have been big draws on the auto show circuit over the last 18 months, it still won’t be in showrooms for quite a while.

But Acura has had other new products to talk about, notably the RLX, the most expensive and lavishly equipped sedan it has ever offered.  It’s meant to showcase Acura’s design and engineering strategy, which the brand sums up as “Man-Machine Synergy,” or as Accavitti puts it, “vehicles that truly respond to the will of the driver.”

While that might come across as marketing-speak, buyers will experience a premium sedan loaded with a range of advanced performance, infotainment and safety technologies. A version of the RLX now in final development will be powered by a unique, three-motor hybrid system designed not only to boost mileage but increase performance and even help power the sedan through aggressive turns by shifting torque to the appropriate wheel.

(Acura one of many makers to plan new hybrid models. Click Here.)

At the other end of the spectrum, Acura has also introduced a new entry-luxury sedan, the ILX, which it hoped would draw young, increasingly affluent buyers in one of the market’s fastest-growing segments. But while sales of the ILX topped 10,700 between the beginning of January and the end of June, the little sedan has received mixed reviews, at best, suggesting to some that Acura still hasn’t quite figured out what it needs to be.

The challenge that the ILX may have missed is “getting back to basics and making sure that (Acura) products are very different from those of the parent, Honda,” stresses auto analyst Joe Phillippi, of AutoTrends Consulting.

(Click Herefor a first look at the updated 2014 Acura ILX.)

For the first six months of 2013, Acura has finally begun to catch up to the rest of the industry with a 6.2% sales gain compared to the same period a year ago, volume rising to 76,981 which was still will behind the numbers of key competitors.

The maker actually might have done a fair bit better were it not for the 24.0% tumble by the critical MDX luxury SUV, which saw sales slip to 18,214 compared to 24,117 last year.  Acura officials are quick to note that they’re wrapping up a model changeover and an all-new version of the MDX – they forecast – should bounce back in the months ahead and could help Acura outpace the overall U.S. auto market recovery.

And to make sure Americans can’t miss the new model, the maker recently launched what it is calling the biggest single marketing campaign in its 27-year history, a move coinciding to switch to a new agency, Boston’s Mullen Advertising.

A deeper look at Acura’s sales charts show it sold just 44 of the quirky ZDX models last month, wrapping up one of Acura’s biggest failures. But it may have served as a high-cost, if much-needed lesson, suggests American Honda’s top U.S. executive, John Mendel. The ZDX was one of several major flops marketed by both Acura and the mainstream Honda brand that were originally designed for Japan, Europe or other foreign markets and only incidentally added to the American line-up – to catastrophic results.

Going forward, say both Mendel and Accavitti, that won’t happen.  Acura, in particular, plans to put even more focus on its original market, the U.S., going forward.

“We’re focused on improving our efforts in North America,” says Accavitti, though he quickly adds, “We still see a very global potential.” Indeed, the maker is reportedly planning to launch production in China by 2016, joining the Honda brand in targeting what is now the world’s largest automotive market. It’s an obvious step, as China also is expected to become the biggest luxury car market by 2017.

The NSX, in particular, could give Acura global traction, but it’s still some time from roll-out. And, indeed, Acura officials caution they don’t expect a quick return to the first tier of luxury brands.

“These things take time,” stresses Accavitti. It will likely take “a couple years to see whether we move the needle.”