Ram Throws Down Gauntlet with New Diesel for Light-Duty Pickups 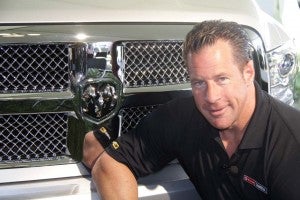 Brand CEO Reid Bigland with the full-size Ram 1500 pickup which gets a new diesel for 2014.

Chrysler is throwing down the gauntlet, its Ram truck division planning to become the first maker to offer a high-mileage diesel in its light-duty pickup line.

Ram, which is expected to post its 39th consecutive monthly sales increase next week, is betting that this will give it a critical advantage over competitors both domestic and foreign at a time when fuel prices continue to hover just below $4 a gallon in much of the country.  The question is whether potential buyers will balance the initial, $2,800 price premium against the longer-term savings on fuel.

“When you look at the psyche of pickup truck owners,” Reid Bigland, the CEO of the Ram division, said  during a preview of the new powertrain, “they’re more aware of the benefits of a diesel engine” than the general U.S. population. 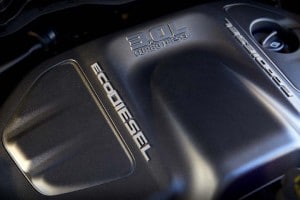 The heart of the new Ram EcoDiesel.

Diesels typically deliver as much as 30% higher mileage than a comparable gasoline engine. But what Ram officials believe could prove equally significant for customers is the high-torque nature of the diesel in a business where stump-pulling power is as, perhaps more, important than off-the-line accelerations.

Despite its relatively modest 3.0-liter displacement, Ram’s new turbodiesel makes 240-horsepower and 420 pound-feet of torque. That’s roughly equivalent to the maker’s big 5.7-liter Hemi V-8, even while the diesel is expected to deliver fuel economy closer to the Ram 1500’s V-6 option.

At the moment, the maker has not come up with final, EPA-approved mileage numbers, though Bigland cautions the Ram 1500 will likely get slightly less than the 30 mpg the new, 3.0-liter diesel-powered version of the Jeep Grand Cherokee is offering. 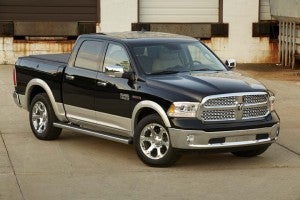 The 3.0-liter diesel will become available on virtually all versions of the Ram 1500.

The $2,800 premium isn’t the only thing working against a diesel comeback in the U.S., though.  There’s also the higher cost of the fuel, typically running about the same – or even higher – than unleaded premium gasoline.

Even so, Bob Hegbloom, the Ram brand marketing chief, claimed that all-in, “under three years from an efficiency standpoint is all it’s going to take to pay for itself.” And, considering the average pickup on the road today is about 12 years old, Hegbloom said the lifetime savings due to the diesel’s better fuel economy will be measures in the thousands of dollars.

There is, of course, the general disdain Americans have had since the 1980s, CEO Bigland acknowledged, due to the generally coarse, rough-riding and smelly diesels of that era.  The challenge will be to convince potential buyers that the latest diesel technology is smooth and clean while also powerful and fuel-efficient.

There are signs that U.S. motorists are catching on.  European makers are reporting steadily increasing sales – Volkswagen struggling to come up with enough diesel engines to meet demand for some of its passenger car and SUV models, such as the Passat. Its sibling Audi brand will launch three new diesels for the 2014 model-year and another for 2015. 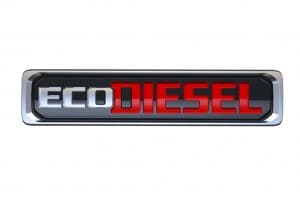 Mazda is adding a new diesel powertrain for its Mazda6 sedan line this coming year.

And even General Motors is adding a diesel for its compact Cruze line for 2014 – its first passenger car diesel in over a quarter century.

But while the domestic makers have long had oil-burner options for their heavy-duty trucks, Ram is the first, and for now only, brand to offer a diesel in a light-duty pickup.

“It will be a great differentiator,” said Bigland, noting Ram has already driven its market share from around 11.5% of the pickup segment to nearly 20% since parent Chrysler emerged from Chapter 11 in 2009.

He hinted the maker foresees the new diesel will account for at least 10% of Ram sales as customers become more aware of the option, but he added, “That could go to 20, 25, even 30%.”

“It’s sure going to put other makers on the spot,” concurred analyst Joe Phillippi, of AutoTrends Consulting.

The competition, including Toyota and Nissan as well as segment dominant General Motors and Ford, have dropped hints, in recent months, they may be looking at diesel options. GM, in fact, had largely finished development of a light-duty diesel, dubbed the Baby Max, prior to its 2009 bankruptcy. And Phillippi said that if GM felt the need, it could be put into a truck in as little as one to two years.

Ford, however, continues to emphasize its EcoBoost, a turbocharged V-6 gasoline engine, as a diesel alternative. It this week introduced a new EcoBoost-powered sport truck spin-off of its full-sized F-150 model, dubbed Tremor.

But if Ram’s new 3.0-liter diesel delivers the buyers, Phillippi and other analysts suggest, the competition will be under severe pressure to respond with oil-burners of their own in short order.