Mazda Back in black for first time in 5 years, but Kia earnings hurt by labor dispute. 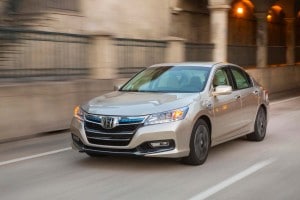 Strong U.S. demand for the new Honda Accord helped buoy the maker's earnings.

Despite slumping sales in China, the world’s largest automotive market, Honda Motor Co. managed to eke out a 6% increase in earnings for the January-March quarter – largely because the year-ago numbers were still impacted by production cuts from a series of natural disasters.

The maker also benefited from the weakening yen, and Honda CEO Takanobu Ito said he anticipates doing even better in the months ahead as exchange rates shift, reducing the penalty on Japanese-made goods.

That was also good news for smaller rival Mazda which crept back into the black for the first time in five years — but in Korea, Kia reported Friday that a bitter labor dispute resulted in a big drop in its earnings.

The maker forecast an even strong year to come, with profits projected to surge to 580 billion yen, with an operating profit of 780 billion yen.  Honda anticipated sales will climb to 12.1 trillion yen for the fiscal year ending March 2014 – compared to 9.9 trillion this past year and 7.95 trillion in the year that ended March 31, 2012.

A variety of factors appear to have worked in Honda’s favor over the past year, including the recovery of its global production network. The automaker was slammed hard by the Japanese earthquake and tsunami that struck the home islands in March 2011, and later by massive flooding in Thailand. It took until early 2012 before its production was fully back to normal.

Meanwhile, Honda and the rest of the Japanese automakers have been struggling to cope with lopsided exchange rates that, at one point, dipped as low as 78 yen to the dollar, making it difficult to turn a profit on goods produced in Japan.

“The dollar trading at 78 yen and 80 yen was too extreme,” CEO Ito said last weekend at the Shanghai Auto Show.

The yen has been rapidly losing strength in recent months and as of Friday had dipped at nearly 99 to the dollar, rapidly improving the economic equation for Japanese automotive production. Nonetheless, Honda, like its chief rivals Toyota and Nissan, has rapidly been shifting more of its production abroad, including to the North American market.

Sales in the U.S., in particular, helped buoy the maker’s earnings during the latest quarter, as key products such as the all-new Accord sedan and a recently refreshed Civic model have clicked with consumers.

The ongoing recovery of the American market is a major factor in Honda’s forecast that unit sales will reach 4.43 million during the fiscal year ending next March, up from 4.0 million.

On the other hand, the maker is continuing to struggle with slumping demand in China. Sales there have been badly disrupted by an ongoing dispute with Japan over possession of an uninhabited chain of islands in the East China Sea.  Toyota officials warned that they don’t expect the situation to improve much until at least the middle of this year.

Toyota is expected to report earnings on May eighth, Nissan two days later, and both should reflect similar factors seen at Honda.

Mazda, meanwhile, also reported earnings today, the Hiroshima-based carmaker clawing back into the black with a 34.3 billion yen, or $347 million, profit for the just-ended fiscal year. It was the maker’s first full-year profit in five years.

Mazda said it expects to more than double earnings, to 70 billion yen, for the year ending next March.

Separately, the Korean carmaker Kia reported a 35% slump in earnings for the January to March quarter, to 783.9 billion won.  Sales were down 6%, to 11.1 trillion won.  The maker pointed the corporate finger at a dispute with its union workforce, which saw production at Korean plants plunge 8%. During the dispute, workers refused to man extra shifts, resulting in lost production of 32,000 vehicles.