But have big car sales simply slumped too far? 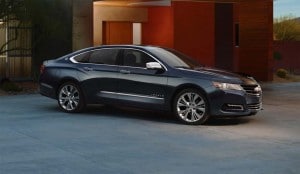 General Motors has big plans for its new full-size sedan, the 2014 Chevrolet Impala, and is hoping that a new emphasis on leasing will gain the redesigned four-door some traction after years as little more than a fleet car.

Going up against some tough competitors that include a new Toyota Avalon and recently updated Hyundai Azera, the new Chevy Impala has been garnering strong reviews since its launch – especially for its distinctive, coupe-like styling.  And by adding a new low-cost lease program as well as a higher-mileage inline-four engine, GM officials said this week they see an opportunity to gain some momentum for Impala after years  on the sidelines.

“We’re looking forward to grow segment share and really attract people from other segments into the large car segment,” Don Johnson, Chevrolet’s vice president of sales and service, said during a media briefing.

But whether Chevrolet – or its full-size competitors – can lure buyers in remains to be seen. The large car segment slipped substantially in recent years, market share falling by half, to just 4%, between 2007 and 2012, according to industry data.

The segment has continued to decline in recent months, slipping to just 3.9% — however, proponents caution that the latest figures could be misleading as production of the Impala is just in ramp-up phase, with Chevrolet scrambling to flesh out dealers’ inventories.

The maker is confident it can draw in more buyers with an affordable 36-month lease that starts as low as $279 – after a $2,799 deposit – and by adding a new 2.5-liter I-4 engine to the Impala line. Production with that powertrain started this week, several months after Chevy began producing the big sedan with a more peppy but less fuel-efficient 3.6-liter V-6.

Leasing could be particularly critical, according to Johnson, who said that for many large car customers, “that’s their preferred method of financing.” GM all but got out of the leasing game following its 2009 bankruptcy due to its economic problems. It has been working hard to ramp that form of financing back up finding it critical in appealing to older, male buyers who opt for large and luxury vehicles, in particular.

According to Chevrolet, about 70% of the outgoing Impala model went to fleet, something that the maker is hoping to reduce substantially – to as low as 30% with the 2014 remake. It also hopes to lower the age of the typical retail buyer from the mid-60s to somewhere between 55 and 60, while also improving the average income level by as much as 50%, to $85,000 to $90,000.

For now, Polk’s Libby is somewhat optimistic. The arrival of new product like Impala – with more on the way from Kia and Volkswagen – is likely to have some appeal, especially to buyers who may be moving out of large SUVs into passenger cars.

“Polk’s light vehicle forecast indicates that the current large car category will survive in the near term,” said the analyst, though he cautions that the longer-term outlook is far less certain, suggesting, “It seems more probable that in the long term a “re-definition” or “relabeling” will occur and the current crop of midsize cars such as the Camry, Accord, and Fusion will be the largest cars in the non-luxury space.”

Eventually, Libby and other analysts expect that classic, full-size products will continue to thrive only in the luxury segment of the market.