My Take on This Year’s Auto Commercials 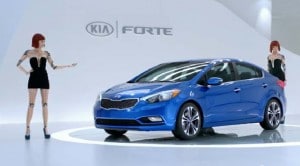 Kia will introduce the Hotbots in its Forte ad. Will they become the maker's next "hamstars"?

We’re rapidly approaching that annual celebration of advertising excess known as the Super Bowl.  And this year’s event, XLVII is already creating headlines, as the debate over Volkswagen’s Jamaican-themed spot demonstrated this past week. Almost 40% of the ads that will air on CBS’s broadcast of the game-of-the-year are auto ads. But unlike past years, there’ll be far fewer surprises as leaks, sneaks and previews have become an important component of the actual broadcast.

Eight car brands are running ads, the question is, “Who is going to have the best car commercial in the broadcast?”

After a review of all spots so far released, here are links to the ads, my picks and rationale for their ranking and when each will run in the game so you don’t miss ‘em. 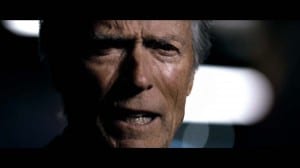 Clint Eastwood and the "Halftime in America" ad became a viral hit after the Super Bowl debut.

Based on its history over two previous Super Bowls, Chrysler has to be the favorite out of the box, but as usual their lips are sealed and not even the broadest hint of what’s in store has yet leaked out. When I e-mailed Rick Deneau, head of brand communications of Chrysler, asking for information about their new ad, his response was “Nothing I can tell you, unfortunately.”  Will air in one of the quarters, but don’t know which one and Chrysler isn’t even revealing that detail.

Most Popular Last Year  – Volkswagen – but …

With the most number of YouTube hits with last year’s cute Darth Vader spot—Google selecting it as one of the top commercials of 2012 — the Ad Brawl spotlight is on VW.  Good luck. Based on the “Get Happy” commercial that’s been leaked I doubt it will again achieve that level of success. There has been a negative reaction by some to the Jamaican overtone to the commercial, but not from the Jamaican Tourist folks.  You decide Click Here .

Will air in 2nd quarter.

(For more on the controversy over the VW ad, Click Here. 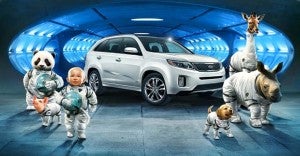 Kia explains where baby's come from.

Kia Will Be Tough to Beat

Backed by arguably the most impressive pre-sell-teaser-leak campaign of all the auto advertisers, Kia’s commercials continue the trajectory of their award-winning “Hamstar” spots which proved auto advertising can be fun, entertaining and yes, sell cars.  The newly updated 2014 Sorento CUV will be featured in the Space Babies commercial which answers the question, “Where do babies come from?” Click Here.

And the Forte will be re-launched with my pick as probably the funniest, maybe number one car commercial of the entire broadcast. Click Here.

One runs in the 3rd the other in the 4th quarter.

Mercedes gets its name out.

The former New Orleans Superdome is now the Mercedes-Benz Superdome with big and bold exterior and interior signing and local outdoor boards promoting the game in the marketplace.  The teasers for Mercedes (especially the Kate Upton commercial) may, okay will probably outpace consumer response to the actual in-game commercial which is rather dark. For the long form preview Click Here.

The spot will air in 4th quarter.

This is the sixth time the fast-growing luxury brand has been a Super Bowl advertiser with totally different creative concepts each time often blazing new creative paths. This year is no exception. Backing the brand’s commercial was a consumer competition to determine how the commercial would end. For the winning commercial that will air after the first break, Click Here.

Two in-game commercials will be used. The first is based on football but not the NFL. In a slice-of-life commercial, a kid and his mom recruit his own football dream time in a very clever, funny and effective pitch for the new seven passenger Santa Fe. Click Here.

One will air in 1st quarter, the other in the 2nd.

Will Toyota’s Wish Be Granted?

From its cautious and conservative approach, the resurgent brand has benefited from its revitalized, reimagined and revised consumer advertising campaigns. The brand’s current Super Bowl entry was extensively teased– Click Here to view it.

Now you can see the actual spot. Click Here.

Will air in 1st quarter.

A Tundra spot and a brand ad will air in the post game show.

Lincoln Is All a-Twitter

The new marketing strategy for the newly renamed Lincoln Motor Company aims at a much younger demographic profile compared to what the brand — formerly known as the Lincoln Division — aimed for in the past. Last December the brand announced it would run one 60-second spot, but that was revisited and changed to two 30-second spots. One is based on a big Twitter program asking for outrageous road trip ideas that was promoted by gab-show host Jimmy Fallon. Not released as this goes to posting, but for a look at what went on behind the scenes, Click Here.

The other is a brand spot featuring the new MKZ. To see the teaser Click Here.

One airs in the 3rd quarter, the other TBD.

Honda is On the Bench

Good reviews and lots of fans for its commercials in last year’s telecast, but Honda has opted out of the XLVII fray.  When queried as to why, the maker’s response was, “Honda will not run a national ad during this year’s Super Bowl.  It was just not part of our overall strategy this year.” Okay, but the brand also acknowledged it will run regional ads for the Civic and Accord most likely in station break time which is a lot less expensive than the reported $4 million per 30-second spot for thenational Super Bowl XLVII broadcast.

Enjoy the game – there’s no preview, tease or sneak peak. It happens in real time and isn’t that the way it should be done?

(Oh, and speaking of real time: For those who still want more data as in real-time ad scores during the game, tune into Ace Metrix on Twitter @ace_metrix.