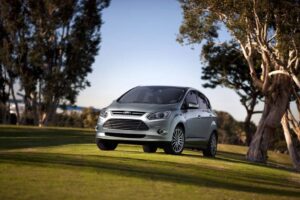 Ford is offering both a conventional hybrid and a plug-in version of its new C-Max people mover line.

With a significant surge in recent months as it rolls out new product, Ford Motor Co. is betting it has begun to close the gap with the long-time leader in the hybrid market, Toyota Motor Co.

Ford is reporting a more than threefold increase in sales of its various gas-electric offerings for January, following strong gains during the latter months of 2012. Some of that has come from updated offerings like the latest-generation Ford Fusion Hybrid, but the maker is also claiming preliminary success with the all-new C-Max, a dedicated line of hybrid people-movers directly targeting Toyota’s familiar Prius “family.”

Even so, few expect Toyota to readily relinquish its lead. And analysts caution that Ford’s aggressive push into battery power hasn’t been without its problems.

“We’re bringing new hybrid buyers into the market, many of whom wouldn’t be considered traditional hybrid buyers,” said Amy Marentic, Ford’s marketing manager for small and medium Cars, a list that includes a number of the maker’s new gas-electric models. 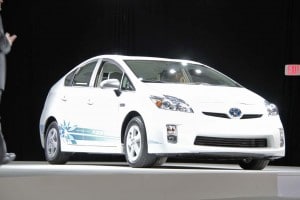 Toyota's share may have slipped but it intends to remain the dominant hybrid player with an assortment of new models, such as this Prius Plug-in.

“There’s a sense hybrid buyers represent a pragmatic or green ethic. Fusion Hybrid is scoring with these audiences, but the car also puts some excitement into the segment through design; it shows hybrids can have beautiful and sophisticated styling. This, in turn, means different buyers,” she added.

The new Ford Fusion has won wide praise for its distinctive design which helped land it a spot as one of three finalists for North American Car of the Year – though the Cadillac ATS ultimately captured that coveted trophy.

Meanwhile, Ford launched the new 2013 C-Max specifically limiting buyers to a choice of a conventional hybrid or a plug-in driveline.

Significantly, the maker’s hybrid technology has been completely updated for the 2013 model-year, helping the maker deliver some of the highest fuel-economy ratings in each category.  The Fusion Hybrid, for example, is rated at 47 mpg in the City, Highway and Combined categories, according to the EPA, which certifies fuel economy numbers.

But there are some other figures that could play out well for Ford, company officials note

While January numbers have not been finalized, Ford’s launch of the new C-MAX hybrids and Fusion Hybrid this past fall led the company to reach a company record 16% of the U.S. hybrid market in December, a full 9 point, year-over-year increase, according to Ford data. In the same period Toyota’s share of the hybrid vehicle segment fell 8 points – though that still left it with a 60% grip on the U.S. hybrid market.

Not only are most buyers new to the Ford brand, early data suggest Fusion Hybrid is appealing to younger buyers outside the traditional hybrid vehicle demographic.

Ford reports 2013 Fusion Hybrid buyers are five years younger than those who purchased the previous Fusion Hybrid, dropping to 48 years, on average. By comparison, 2012 model year Toyota Camry Hybrid buyers have an average age of 54, according to J.D. Power and Associates PIN data.

Moreover, 22% of Fusion buyers are under the age of 35, while only 13% of Camry Hybrid buyers are.

A telling trend reveals nearly 70% of new Fusion Hybrid owners are new to the Ford brand, while Toyota’s conquest rate for its Camry Hybrid is only 53%.

Best-selling markets for the Fusion Hybrid are San Francisco, Los Angeles and Washington, D.C., traditionally weak regions for domestic makers. But Ford reports stronger sales in the more traditional buying areas of the Central, Southeast and Great Lakes regions – areas where the Big Three have a better presence – but where hybrid sales have, until now, been marginal. In these areas, Ford’s hybrid retail sales more than tripled in December compared to the previous year.

Fusion Hybrid continues to have the fastest turnover rate (the number of days cars sit on dealer lots waiting to be sold) of any vehicle in the Ford lineup. Fusion Hybrid turns over in just 10 days on average.

Ford sold more hybrids in the fourth quarter of 2012 than in any other three-month period in the company’s entire history with 19,554 units sold, besting its own previous hybrid vehicle sales record by more than 193%, the company reported.

The maker’s initial data for January indicates hybrid sales surged around 350%. It also sold 2,725 C-Max vehicles, including both the conventional and plug-in.

Despite Ford’s optimism, the maker does have its issues.  It has come under fire from several quarters in regards to its mileage claims, Consumer Reports faulting a number of vehicles and at least one lawsuit challenging the maker’s ratings, particularly on the various Fusion models.

Ford has also been struggling to build momentum for its even more advanced battery-electric vehicles and, as TheDetroitBureau.com recently reported, it is offering $10,000 discounts for lease customers of the compact Focus Electric model.

For his part, analyst Dave Sullivan, of consulting firm AutoPacific, Inc., believes it is “too early to tell” whether Ford is positioning itself as a serious challenger to hybrid king Toyota. But he also says “It’s not a surprise that the maker is gaining ground” with its latest technology which he feels is a solid improvement over the prior-generation hybrid system. The newer models “are also a lot nicer looking,” adds Sullivan, who contends styling still matters, even to those seeking to maximize their mileage.

Hybrid makers, in general, have been struggling to kick-start the gas-electric segment which has been hovering at less than 4% of the overall U.S. market in recent months.  Sullivan and other analysts believe it could gain some momentum if recent increases in petroleum prices continue.

Another factor is the steady increase in the number of competitive products coming to market. Ford isn’t the only maker hoping to topple Toyota, Honda recently launching a plug-in version of the all-new Accord, with a conventional hybrid to follow.

Nissan is also planning a wave of new hybrid models, likely including such key products as Altima and Pathfinder.

But Toyota will also defend its turf and is rapidly expanding its gas-electric line-up including models in both its mainstream segments and high-line offerings such as the all-new 2014 Lexus IS 300h.