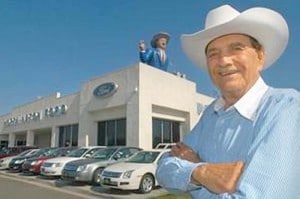 We saw 2012 end with metaphoric skyrockets lighting the midnight sky for most auto marketers. Business was far better than expected. It was good, damn near great! Some auto advertisers were patting themselves on the back for their Super Bowl ads that went viral – viral all year! The consumer marketplace despite the on-going recession was in the car buying and leasing mood.  Result?

Single malts and champagne toasts along with the occasional long necks were raised in praise of the outgoing year along with great expectations and eager optimism for 2013.

But in some corners of the automotive marketing, advertising, promotion and public relations world the future was at best bleak. There were more important new ad agency appointments in 2012 than ever before with many unplanned career changes and relocations for creatives, media and suits at every level. And there’s at least one big switch to come in the New Year with others rumored.

Creative for most auto campaigns, commercials and ads no matter the media was (you pick) dull, boring, bland, insipid, stupid, uninteresting, over-produced or silly. Test: name at least three really good, interesting and provocative commercials that were product based without running footage in distant mountains, through the sand, snow or muck. And at least one new agency’s creative work for a new client is so terribly out-of-touch with the real world, the new shop should be ashamed and embarrassed for presenting it and the client mortified for approving it.

Creativity is now and was the redheaded stepchild in most campaigns. Super Bowl ads notwithstanding. Certainly there were the rare exceptions. Generally on-camera and recognizable voiceover hosts, talking heads and spokesperson’s lacked the integrity, passion, charm and subtlety of Joe Theisman’s herbal prostate medication or the former Senator’s pitch for reverse mortgages commercials. And please, please don’t get me started on those incredibly bad local dealer group or regional groups ads for special sales, clearances and Christmas gift giving that are foisted on us annually. Cal Worthington should rest in peace knowing what he hath wrought.

Media wise, broadcast and cable television viewing was dropping for many program genres; well, all except jockcasts and of course rates were up. Howz that for counterintuitive thinking?  Increased use of DVRs let viewers skip commercials if they wanted. Not too good for advertisers, right? Social media, you pick the flavor, site or platform ruled for many auto advertisers. This phenomenon has dramatically altered the media paradigm because ROI really, really, really matters. Yet social media have yet to gain wide acceptance for aging Baby Boomers and up – they’re just the demographic group that has a lot of money and loves cars. And they are virtually ignored by most carvertisers. When did you see a car ad in an AARP magazine?  And now the robber barons of telecommunications that really control smart phones get even richer as they sell, actually double dupe us with mini-ads, texts and messages on mobile devices. Who in the hell is paying for what?

It’s the dawn of the Triassic Era for traditional print mediums – newspapers and magazines – even catalogs and brochures as they become extinct with huge circulation and advertising drops. Coffee tables, doctors offices and libraries will miss the slick and shiny paper of quality publications. Many special interest mags have already been dumped or put to rest. The importance of auto enthusiast magazines is waning as instant updates of the Internet grows more vital: 72% of all new car purchases were researched on the web. Some may well morph into online disseminators’ of news, advertising and the out-of-touch COTY awards ad specials. Their in-depth print articles and reviews are vital and vibrant helped build the industry. Let’s not lose them.

Other mediums, such as radio, the theater of the mind, are becoming a lost creative form which is a shame. Don’t you miss those jingles? I do. Most outdoor boards are lackluster except in Times Square where I vividly remember the Chevrolet sign spectacular when I was a kid. Now, even the vaunted NASCAR — what wins on Sunday sells on Monday world – is in poor, if not dire straits. Pun intended. Car company sponsors have dropped out or have really cut back on budgets. The brand no matter how hard it gets pushed and it gets pushed is in second place to the driver. Opps. Tiger has had a semi-return to golf, but without him pro golf events ratings numbers are a water hazard. Ah, but the PGA has allowed the golfers to wear damn near as many logos as NASCAR drivers. Country came to country clubs, didn’t it?

All these changes have impacted automotive product publicity and public relations.  Once the mail delivery person, FedEx or UPS driver staggered under the load of press/media kits they delivered prior to the start of Detroit Auto Show, once the official start of the new car marketing events and activities. Now it’s year round. The slick media kits (no sales on eBay though) of releases, photos, engineering specs, news and some model cars have been replaced with CDs, thumb drives, USB devices or email attachments and links. They are as good if not better than the old style, certainly not as bulky, cost less, are probably as effective and efficient but lack a certain charm. And pity the PR department which has to research, plan and implement the mini-auto-shows at some spectacular venues domestically and internationally that launch individual models. It’s a big job and they do it well.

This Triscadecaphobia (this in case you didn’t look it up is fear of the number 13) edition is not intended to cast a pall or negative look at the next twelve months. Rather it’s my verbal toast of reality to the marketing minions —  today’s Mad Men and Women who toil in cubicles, open spaces, edit suites, nice offices and work long and often arduous hours to create visuals and verbal’s to entertain, enlighten and sell millions of bright shiny objects called automobiles. You are making history every day despite clients who don’t or won’t let you make that logo smaller. I lift my martini to you all.