VL Automotive will drop a Corvette engine under the hood of Karma plug-in hybrid. 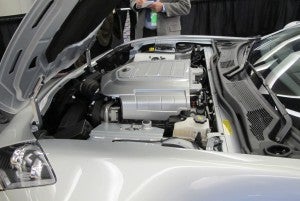 VL Automotive plans to convert about 200 Fisker Karmas to conventional cars with Corvette V-8 engines under the hood.

A new firm, VL Automotive, is planning to turn the plug-in hybrid Fisker Karma  into a conventional vehicle.

Former GM Vice Chairman Robert Lutz told reporters at the North American International Auto Show, that the new Destino, as the car will be officially called, would be unveiled during the auto show’s second press day later today. However, he offered TheDetroitBureau.com, a peek at the new specialty cars that captures what Lutz described as the Karma’s beautiful design and marries it with a Chevrolet chassis to produce a four-doors sports car.

In a wide-ranging interview after speaking about Via Motors, Lutz said converting the Karma hybrid into a conventional vehicle wasn’t that difficult. He also shared his thoughts on the Chevrolet C7 Corvette introduced Sunday in advance of the Detroit Auto Show. 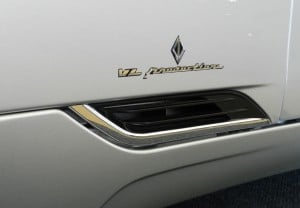 The VL Automotive badge on the converted Fisker Karma.

“We put the driveshaft into the battery tunnel,” he noted. In addition, the Karma required a few other changes, including making room for a traditional engine under its long hood.

Instead of the Karma’s hybrid powertrain, Destino uses supercharged V-8, the same LS9 that powers the Corvette ZR1, Lutz said.  The entire package from VL could run around $180,000.

Lutz talked about the Destino after introducing VIA Motors proprietary V-Drive.

Owners of fleet of small trucks and delivery vans have expressed great interest, which can run up to 50 miles on a pure electric charge before the system’s gasoline motors is turned on, Lutz said. The demand for the system will increase even more as cities makes certain sections “carbon free,” Lutz said.

The German city of Munich, for one,  already has a carbon-free zone in the works. As more and more cities impose such rules,  plug-in hybrids offer the best way to deliver goods,  Lutz noted.

“Pure electrics are limited,” he said. “These make more sense.”

VIA is a privately held electric vehicle development and manufacturing company. VIA employs a streamlined second-stage manufacturing process to integrate its proprietary V-Drive electric powertrain into new vehicles, then sells directly to fleets under the VTRUX  brand name. VIA VTRUX delivers up to 40-mile battery range and unlimited extended range, averaging up to 100 miles per gallon.

Lutz also said the new seventh-generation Corvette unveiled at the Detroit Auto Show must be a shock to GM’s competition.

“They were never expecting anything like that,” he said. “Corvette also shows the philosophy of product excellence has survived my departure.”

The Cadillac ATS, which was named North American Car of The Years at the NAIAS, was developed under his watch as GM’s product czar. But he had no part in the development of the new Corvette, Lutz said. In fact the Corvette project had stalled during GM’s financial crisis in 2008 and 2009. The concept of a mid-engine Corvette was also dropped as GM struggled with bankruptcy, forcing GM’s engineers to come up with a less expensive way to build the new Vette.