Honda’s smallest crossover will be built alongside Fit in Mexico. 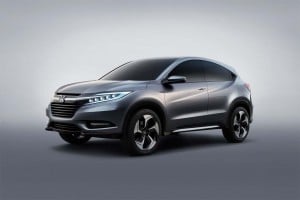 Honda's Urban SUV Concept is a sleek departure for the company that previously brought us the boxy Element.

What, you were expecting an Element redux?

Two years after ending production of the intentionally ugly-duckling boxy Element, Honda showed the Urban SUV Concept, a thinly disguised look at a new small crossover that will slot in below the CR-V in the Honda lineup at the Detroit auto show. Key competitors will be the quirky Nissan Juke and the Fiat 500L, a supersize version of the diminutive Fiat 500.

While the trucklet’s profile is similar to many other small crossovers – including big brother CR-V – a unique, upswept character line that suggest speed. 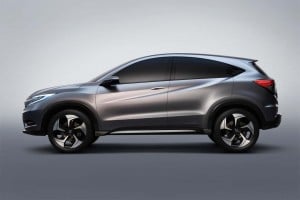 Honda will build the as-yet-unamed production version of the Urban alongside the Fit in its new Mexico plant.

The as-yet unnamed production version will be built on Honda’s Global Compact Series platform, the same as the Honda Fit. Honda will also build the vehicle on the same Mexico assembly line as the Fit.

As the industry moves toward smaller vehicles with better fuel economy, small crossovers in the Urban’s class will probably proliferate. And Honda is counting on selling a lot of them. It expects the Urban to help it double worldwide production of vehicles on the Global Compact Series platform to more than 1.5 million units.

“No one has had greater success with small cars than Honda, and this Urban SUV Concept will create new value in the growing small-SUV segment,” said John Mendel, executive vice president of sales at American Honda. “With the continued expansion of our North American manufacturing operations, we expect fuel-efficient and fun-to-drive ‘small’ cars to play a key role in meeting the needs of our customers in the U.S.”

The North American International Auto Show is expected to be dominated by subcompact and compact SUVs and crossovers. Click here to read about some of the other little utes that are expected to break cover at this year’s show.

Honda said the Urban will use its Earth Dreams Technology for increased fuel efficiency. Inside, it will feature a layout that is similar to the Fit, including its trick MagicSeat, which can be configured for a variety of passenger and cargo options. Honda did not show the vehicle’s interior, but said it will be modern and feature the latest telematics technology.

The Urban will be manufactured along with the Fit at Honda’s newest North American plant near Celaya, Mexico, expected to open in the spring of 2014. While the new SUV is targeted at the U.S. market, Honda will sell it in many other markets around the world.