The Chinese automaker has no plans to sell its vehicles in the U.S., but hopes to raise its profile in the automotive industry. 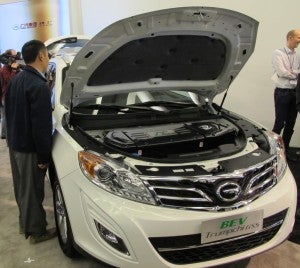 While Guangzhou Automotive Group has no plans to sell its vehicles in the U.S. it came to the Detroit Auto Show to raise its profile in the industry.

Chinese automaker Guangzhou Automobile Group showed off three vehicles, including a hybrid and an electric vehicle, at a press conference at the Detroit Auto Show.

While the company has no plans to sell its vehicles in the U.S. market, it came to the North American International Auto Show to raise the profile of the company and its Trumphchi brand.

Xiu Jihan, a senior engineering engineering executive, said the hybrid vehicle is ready for sale in China but the battery electric vehicle, prepared with the help of  AC Propulsion of California. But the company has no plans to bring cars to the U.S . any time soon, company GAC representative said after the press conference.

Guangzhou and its U.S. partner, AC Propulsion, showed the Trumphchi GS5-BEV Pure Electric Vehicle Concept, which is based on the ICE Trumpchi GS5 SUV introduced in March 2012.

“We are delighted to work with forward-looking companies such as GAC Group that share a vision of developing environment friendly vehicles without sacrificing vehicle performance,” AC Propulsion President  Paul Carosa said.

Besides building cars under its own brand, GAC also partners with Honda and Toyota in the Guangzhou province in southern China.