Will Car Sales Plunge Off the Fiscal Cliff? 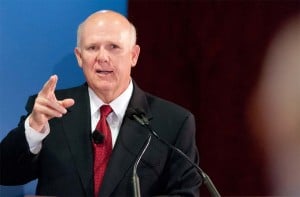 Preliminary estimates suggest December will be one of the best months the U.S. auto industry has seen in years, with sales up by as much as 15% year-over-year – but in the final hours of 2012 industry officials seem worried that the good times could be over all too soon.

As one of the most expensive items a consumer will buy – and as a discretionary purchase that usually can be postponed – analysts anticipate the auto industry will see a severe drop-off in demand if Washington lawmakers fail to meet the midnight deadline and send the U.S. economy hurtling over the so-called fiscal cliff.

“We’re watching (the negotiations in Congress) very closely,” General Motors CEO Dan Akerson said this month, adding that he is “quite concerned” there won’t be a settlement in time to prevent a sharp rise in taxes for the average American – along with significant cuts in critical spending programs.

That would be dreadful news for an industry just finally getting back on its feet after the worst economic downturn since the Great Depression more than seven decades ago.  Car sales that plunged to barely 10 million in 2009 were expected to end this year at around 14.5 million – though there are signs that concerns about the Washington deadlock may already be cutting into what had been forecast to be a solid last week of December.

While the auto industry was among the hardest hit by the recent recession, economists have suggested it has also played a critical role in helping the country dig out of its financial morass, sales repeatedly coming in stronger than forecast.  And the outlook has been even more positive for the near-term future – as long as Congress and the White House can reach a critical compromise.

“Assuming that hurdle is cleared, 2013 is one step closer to a stable and sustainable growth rate for autos, with volume above the 15 million unit mark,” said Jeff Schuster, LMC’s Senior Vice President of Forecasting.

In fact, Jim Lentz, Toyota’s top U.S. executive, recently suggested industry sales could tip the 16 million mark in the next several years. It remains uncertain, however, if the market will reach its 2005 peak of 17.5 million before the current recovery tapers off.

Much of the momentum the industry is experiencing comes from pent-up demand.  Millions of potential buyers postponed purchases during the recession, whether due to a lost job, inability to line up financing or simply because of fear about the country’s economic future.

The concern is that many American motorists will once again postpone purchases.

“For many folks, buying a new car is the result of an agonizing decision process” that requires a careful balancing of income and household expenses, said Joe Phillippi, of AutoTrends Consulting.  “Having to now pay an extra $1,500 or $2,000 in taxes, that could be a real deal-breaker,” for many potential buyers, added Phillippi, who believes that failure to reach a legislative compromise will be “really bad” for the auto industry and the rest of the economy.

A survey of 2,500 U.S. motorists, conducted by the website Swapalease.com, backs that up. More than one in four respondents would even consider getting rid of a vehicle without replacing it to reduce monthly loan payments. Nearly one in six would try to downsize monthly car payments by at least $100 a month.

The survey also found motorists expecting to cut back on vehicle maintenance, such as oil changes, engine tune-ups and car washes, to save money.

“It’s vitally important for the economy that we work this out,” warned Ford Chairman Bill Ford.

There’s an old adage that when the economy catches cold the auto industry gets pneumonia.  If Washington fails to reach a settlement before the deadline that soon could be put to the test.