The ad agency games are on! 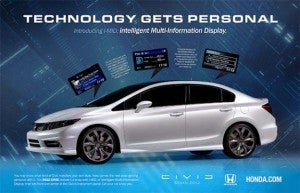 Is Honda getting the best possible creative work? That's what the review is intended to find out.

For decades – yes, decades – automobile clients were the backbone of many advertising agencies. Chevrolet was with Campbell-Ewald since the 1940’s. Gone under the brief but dramatic reign of global marketing czar Joel Ewanick. Cadillac was the cornerstone of McManus John and Adams (and various iterations) since the 1900’s as were its siblings Pontiac and GM Corporate. Gone like that, also by JE. Volkswagen began the trend of contemporary advertising with some legendary Beetle ads. But eventually, Doyle Dane Bernbach lost that business, too.

In recent times BMW has changed agencies, as have Volvo, Porsche, Chrysler, Dodge, Buick, GMC, Mazda, Jaguar, Hyundai, Land Rover, Mini, VW, Saab, Fiat and a couple I can’t recall.  Billions of dollars in expenditures and income gone. It is a very tough and competitive business — and as we’ve just discovered, the Honda/Acura account could soon join that list.

Why? Simple — stability be damned! In our fast-paced-new-media-social biz-results-focused marketing world client retention and stability are founded on sales! That is a monetary result can be tracked, measured and evaluated. John Wannamaker’s ad cliché, “Half my advertising dollars don’t work. I just don’t know which half.” has been replaced. Its replacement: “Every ad dollar must have a sales ROI.” Adding to the account turmoil is the fact everyone is an advertising expert, critic and judge of good advertising.  It is rightfully sales, sales and of course sales.

Certainly exceptional creative advertising can generate sales and fuzzy-feel good product attitudes. Just look at the growth and success of Kia’s with their hamsters commercials. And of course Fiat has had a 180 degree change is sales with its in-your-face and sexy commercials.

After twenty-six years the agency, RPA, was told the Honda/Acura account, reportedly worth $700+ million for creative and media, is going in review. That is devastating news. What happened to Honda at its long time shop? Was it ineffective advertising? Poor communication? Bad direction? Consistently over budget? Poor focus?  Boredom? Longevity? Too inbred? Lousy creative? Terrible media buys? Absent management? Unreliable client service? Too much client direction or lack of it? Could it be the products themselves? Who knows. Maybe one or more, perhaps all of the above.

In a conversation – appropriately, over a stiff bourbon – Honda of America Chairman Tetsuo Iwamura took responsibility for the decision to put the agency up for review. He specifically denied there was any single reason for the move and insisted it was just a way to ensure his company was getting the most creative work possible.

There’s an axiom in the Mad Men world after an account goes into review that an agency can only be as good as the client lets it be. Rationalization at its worst.

But the news should not have come as a surprise to RPA. In fact there was a prescient moment. Last September the Honda dealers in New York, New Jersey and Connecticut joined forces in a new group called The TriHonda Dealer Group. They created a media budget estimated to be worth $40 million and announced they were looking for an ad agency. Duh!!! What was wrong with RPA?

The president of the group, Rob Sabbagh was quoted in Ad Week as saying, “The new assignment includes both creative responsibilities (TV ads, digital ads, social media marketing, sponsorships) and media planning and buying. The work will complement national and regional ads from the American Honda Motor Co. and individual dealer efforts. “We’re missing that tier two advertising.”  If dealers are unhappy with the advertising they have — or conversely have not been getting – there could be bad news coming in the future. The object of advertising is to sell somebody something.

And thus Roth & Associates, a respected agency search firm, is supporting the reviews for Honda and Acura’s advertising accounts. Honda chief Iwamura insisted that RPA is still a strong player in that process but the conventional wisdom within ad circles is that once a review begins the old team almost never wins,

So, if Honda goes somewhere else, will one shop be selected for both? Different shops for each brand? Who knows?  News indicates the announcement will be made during the first quarter of 2013. Couldn’t happen at a worse time of the year for RPA employees — suits, creatives, media, public relations, etc. – they must be overwhelmed with anxiety. Stoicism that this is just a normal part of agency business does not work.  Let the agency shoot-out begin.