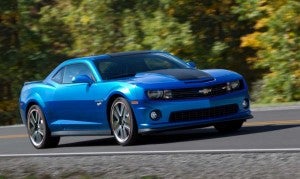 The next Chevy Camaro will be produced in the U.S.

General Motors has confirmed the next-generation Chevrolet Camaro will be assembled at the Lansing Grand River (LGR) Assembly Plant in Lansing, Michigan. The decision marks the first time in years the pony car has been assembled in the U.S.

Production of the Camaro has been handled at a plant in Oshawa, Ontario. But GM has decided to consolidate its rear-wheel-drive products in order to maximize production efficiencies.

Lower capital investment and improved production costs were key factors in the business case. The Camaro is the only rear-wheel drive vehicle built at Oshawa, a sprawling facility located just outside Toronto.

The current Chevy muscle car was launched in 2009 after seven years out of production.  That would suggest a new model likely won’t reach market until the 2015 model-year at the earliest.

Production of the current generation Chevrolet Camaro will continue on the flexible manufacturing line at Oshawa Assembly until the end of the current product lifecycle. GM will continue to meet the production targets agreed to with the Canadian and Ontario governments during the 2009 restructuring.

GM also will continue to build the Buick Regal in the Oshawa plant and the automaker recently invested $185 million to support the launch of two new products on the flex line as well: the all-new Cadillac XTS and the next-generation Chevrolet Impala scheduled to launch in 2013.

In addition, GM recently announced it will add a third shift to support the launch of the new Impala there. The consolidated line at Oshawa Assembly will continue to produce the current generation Chevrolet Impala and Equinox until June 20,2 2014 when it is scheduled to be phased out.

The Camaro has proven a solid hit since its return to production, routinely besting its long-time adversary, the Ford Mustang. But maintaining that lead will be a challenge, especially with Ford preparing an all-new version of the Mustang. The two pony cars are expected to hit showrooms within a year or two of one another.