Escape with a luxury touch? 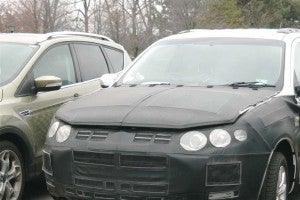 Once one of the dominant luxury brands, Lincoln has slipped into near obscurity, in recent years, as it’s been passed by BMW, Mercedes-Benz and Lexus as well as cross-town rival Cadillac.

Part of the problem has been a lack of a competitive product portfolio. But now, Ford Motor Co. seems intent on giving Lincoln what it needs with an assortment of offerings that will cover a lot more white space over the next few years.

The turnaround effort gets seriously underway in 2013 with the launch of an all-new Lincoln MKZ and is followed by, among other critical additions, an all-new sport-utility vehicle — shown here. 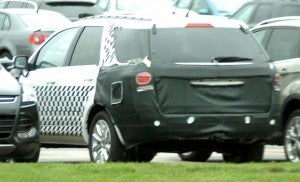 Here’s a look at what Lincoln is planning for the small SUV market of 2014. Or, to be more precise, a crossover-utility vehicle. This prototype is based on the 2013 Ford Escape architecture (wheelbase, drive train, 2-/4-wheel drive, 5-place seating, four cylinder engine, elevated seating position).  That means it gets the same car-like layout as Escape, which shifted this year from traditional truck to CUV design, with its weight, handling and fuel economy advantages.

Note the contrast between Escape (the adjacent vehicle in the front view) and Lincoln in greenhouse design and roof rack strip (better aero).

Lincoln is expected to maintain its other utes, including the big MKT and Navigator, though both will be getting their own refreshes by mid-decade.

The Escape-based CUV could prove particularly important, however.  Lincoln has, after years of dithering, decided to finally go global, a move that will soon start with its launch in China and eventually see it reach other key markets where compact offerings should gain more traction than the brand’s traditional, large products.

Incidentally, Lincoln has just gotten a new global boss in the form of Jim Farley, Ford’s global marketing chief.  He will now add shepherding the luxury brand to his daily assignment list.

(For more on the management shift that put Jim Farley in control of Lincoln, Click Here.)