Big changes in a little package. 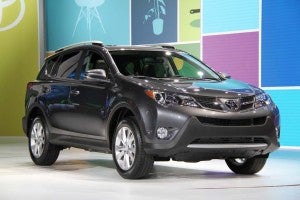 Toyota's new RAV4 adopts a more expressive design - and a number of other changes.

Toyota helped define the “cute-ute” segment with its original RAV4. And it is hoping that the all-new crossover making its debut at this year’s LA Auto Show will help redefine the increasingly popular compact CUV segment.

But there’s no question that competition is getting tougher – no surprise – as sales soar to record levels.  Americans have purchased 1.7 million compact crossovers since the 1994 RAV4 debut, and a flood of new models has been entering the market, including an all-new version of the Ford Escape that has been transformed from classic, truck-based design to a car-based crossover for 2013.

The basic design is likely to catch eyes and reflects a new emphasis on styling at Toyota, which has long been faulted for its plain vanilla approach.

The new Toyota is roomier, sportier and offers more luxury than its predecessor. According to Bill Faye, Group vice president and general manager Toyota Motor Sales, the RAV4 also is at the forefront with respect to handling, equipment, ergonomics and cost of ownership.

The fourth-generation Toyota crossover is nearly 8 inches longer and over one inch wider, while its height decreased by 1.2 inches compared to the outgoing model, which gives the CUV a stronger and more dynamic stance.

The extra inches also pay off in the interior and the luggage room that increased 25% in volume- to 38.4 cubic feet.

A significant step, which breaks with the RAV4’s heritage, is the shift from the side-hinged rear door to a lift gate, with the spare tire now being moved under the cargo floor rather than hanging out over the rear bumper.

The use of high-strength steel for the body structure resulted in a stiff platform and a strong and light body structure, Toyota officials boast.

Another significant change for 2013 is that the next-generation Toyota RAV4 will no longer be available with a V6 engine, optional on the outgoing model. The 2013 updated will only be offered with Toyota’s  fuel-efficient 2.5-liter four-cylinder unit that produces 176 hp and has 172 ft-lbs of torque.

The 4-speed automatic will be replaced by a 6-speed transmission with Sequential Shift. To keep revs lower at highway speeds and enhance fuel efficiency, fifth and sixth gear will be overdrives.

To provide a more dynamic character, the AWD RAV4 has new technologies like a Sports Mode with Dynamic Torque Control. Spring rates and shock absorbers have been tuned and the electric power steering has been optimized.

The Dynamic Torque Control AWD detects changes in yaw rate in Eco and Normal mode, and in Sport mode it also detects steering angle. Dynamic Torque Control has three different drive possibilities: Auto, Lock and Sport. In Auto the power is primarily delivered to the front wheels, switching to AWD when necessary, which benefits fuel efficiency and reduces drivetrain wear. In Lock Mode at lower speeds, the RAV4 has power delivered to all wheels. Below approximately 25 mph, up to 50 per cent of engine power is sent to the rear wheels for best traction and to help the car go through sandy or muddy conditions. Lock Mode reverts to Auto Mode when the speed passes 25 mph.

Like the outgoing model, the new RAV4 has a towing capacity of 1,500 lbs, among the best in the segment.

The LE base model gets 17-inch steel wheels, while the XLE gets 17-inch alloy wheels and the Limited sits on 18-inch allow wheels.