Our marketing maven's take on COTY and NASCAR 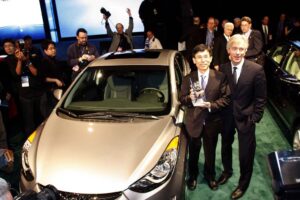 Among the harbingers of Fall are the pernickety Car of the Year Awards (aka COTY) presented in numerous vehicle categories by enthusiast magazines, auto websites, various syndicated columnists and, well, it seems like almost everyone weighs in these days.

Many winners are so surprised their agencies have barely time to simultaneously release multi-page-ads in consumer and trade publications and duly note their accolade in TV spots. Not that there was any advance notice of course.

Then there is the most prestigious COTY award – make that North American Car and Truck of the Year awards — presented during the Detroit Auto show, an event that has justifiably become known as the most prestigious and credible of the breed considering the winners are chosen by a group of 50 independent U.S. and Canadian auto writers.

But now, even non-auto-centric media are recognizing automotive marketing and advertising effectiveness with a fray of their own awards. In this case, it’s not just about the cars. The operative word is now brand and branding.  And that is important because it is consumer-driven. 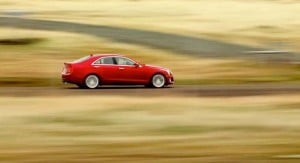 A scene from the Cadillac Versus the World ad campaign.

There’s a new automotive list to ponder: Brand of the Year Watch List which is a prelude to the annual Brand of the Year Award. This honor from Ace Metrix measures television and video analytics and is  based upon the most effective TV brand advertisers during the year.  It is calculated using a compilation of the leading TV brand advertisers in a lengthy list of industries including the automotive ad category – which itself has been broken into two sub-groups: luxury and non-luxury.

The luxury brands on the Watch List include three from the 2011 list, BMW, Cadillac and Infiniti. New additions are Acura and Buick.  Notably not making the luxury list this year are Mercedes-Benz and Audi, according to Ace.  The non-luxury list includes Chevrolet, Fold and Volkswagen – all of whom were on last year’s list — and new additions of Subaru and Chrysler who have replaced Jeep and Nissan as being among the most effective advertisers in their respective categories.  It is important to note the Ace Metrix Awards have no correlation to automotive sales, but are based on metrics the company uses with its consumer panels to determine effectiveness.

To qualify for Ace Metrix Brand of the Year, brands must have debuted five or more unique pieces of creative within an industry containing more than 125 pieces creative and five qualifying brands. The top 5 brands to date for each of the 15 categories can be found by Clicking Here.

“This year’s race for Brand of the Year has been impacted by several factors, including the state of the economy, events like the Olympics, as well as just plain old clever marketing strategies that have boosted some brands significantly, particularly in the beverage, restaurant, technology, and general business sectors,” said Peter Daboll, CEO of Ace Metrix.

Mercedes-Benz, Toyota, Chevrolet, GM and Acura employed a variety of original tactics and led the auto category to increase brand buzz, driving them up NBCUniversal Integrated Media’s third quarter “Brand Power Index (BPI.)” The BPI is Integrated Media’s proprietary tracking of the top 500 most talked about brands among consumers each quarter. These brands led the auto category in terms of consumer awareness as measured by the BPI.  Among the many innovative initiatives, the theme of music emerged as a clear thread among four of the five car companies making a significant impact, with consumer outreach ranging from downloadable mix tapes to sponsorship of high profile music events.

“Automakers have found the right way to connect with specific audiences – from foodies to music fans– by creating functional offerings that build brand affinity without the hard sell, and this subtlety is paying off in organic buzz,” said John Shea, EVP and CMO, NBCUniversal’s Integrated Media.

“In the new edition of our insights book, The Curve, 21% of respondents said brands don’t take the right steps to build community, so it is inspiring to see automakers embracing creative and engaging tactics to rally consumers.” Shea explained

Curve, I learned, is a biannual book of what’s ahead in consumer culture. The proprietary insights provide a synthesis of social shifts, industry trends, and quantitative and qualitative research that tell a story of what’s influencing consumers today, what’s shaping culture next and the actionable opportunities for brands. It is distributed to select members of the ad and marketing community, but everyone reading this column can access an abridged version if you Click Here.

Music fans were singing praises for Mercedes-Benz’s “Mixed Tape,” a downloadable compilation offered every eight weeks that features 10 of the best new musicians from around the world. For foodies, the auto company collaborated with James Beard Award-winning chef Daniel Humm (Eleven Madison Park and NoMad), to create an “On the Road” picnic menu inspired by the new 2013 SL Roadster. The car company reached gamers through a partnership with Electronic Art’s “SimCity Social,” offering users the ability to add a Mercedes factory and billboards to their virtual cities, as well as “drive” a new Mercedes-Benz A-Class car through SimCity.

Toyota’s Corolla brand forged a partnership with The Huffington Post on a 10-part video series called “Becoming Fearless.” Based on Arianna Huffington’s book, “On Becoming Fearless,” the author-hosted show included special guests, including Martha Stewart and comedian Lisa Lampanelli. Also on the digital front, Toyota’s Venza brand worked with MSN on an original web series that followed food personality Andrew Zimmern on a road trip through the south. Toyota’s philanthropic initiatives in Q3, including a video contest for college grads and their “100 Cars” car give away to nonprofits, added to the brand’s buzz.

The quarterly released BPIs, which have been around since 2010, use methodology that includes real-world conversations, social-media buzz, and search queries to generate a list of the 500 brands that adults 18 and over are talking about the most. It is a proprietary research tool of NBCUniversal.

The BPI is very interesting, seemingly unbiased research, but I was inspired to ask the question:  For a car company to be included must they be advertising on NBC? NBCUniversal’s instantaneous response from a spokesperson was: Not at all – that is not even taken into consideration. The BPI is an unbiased analysis of all brands and categories that are garnering consumer buzz. Okay, it is now confirmed. 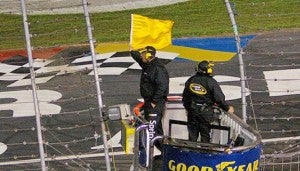 Trouble ahead for NASCAR?

Is the Caution Flag out for NASCAR?

The axiom, “What wins on Sunday sells on Monday,” is history and has been for a long, long time.  Last week’s fisticuffs notwithstanding, NASCAR is getting pummeled with a series of body blows to the nation’s onetime favorite and most successful motorsports entertainment events — both on television and in attendance. Among the wounds inflected are low television audience ratings, attendance at the various venues in steep decline with thousands of empty seats, car sponsors dropping out or cutting budgets significantly, longtime race fan Dodge bailing out at the end of this season and even media interest plummeting.

The Journal contends it’s suddenly possible to imagine the once rocketing sport sputtering toward a halt. In addition to the declines, the story mentioned NASCAR insiders and observers fretting that the sport may have already hit its peak in the early 2000’s. Certainly the economic woes hurt NASCAR, but so did an overzealous expansion to make the sport more popular in the mainstream beyond its ‘you’all’ origins among old moonshine runners.

New race venues were opened in California and Kansas that failed to meet expectations. The drivers became the stars of the sport not the cars, much to the chagrin of GM, Ford and Chrysler. Only Toyota seems to demur and as Senior Vice President Bob Carter once told me, “We are NASCAR enthusiasts.”

Even the racecars have become bland and boring logo-mobiles which adds to the problem of identification and branding. The average fan is a blue-collar guy who now finds it difficult to spend the $80 for a ticket plus the food, drinks, popcorn and the ever popular – no credit cards please – trinkets, treasures and trash and wearing apparel that identifies them as fans.  Thirteen of the racing venues — publically owned by one company,  International Speedway Corporation, that is controlled by the France family that controls NASCAR – have seen revenues drop a huge 43%.

Then there are the mega billions television contracts for broadcast rights. Fox has the rights under a new $2.4 billion contract for the first third of the way too long season for the next eight years. Other rights must be negotiated but with fans leaving how valuable can it be?  TV viewership at 7.3 million is down a 21% from the high of 9.0 million just seven years ago. Viewers down equals rates down and a harder sell.

Triage is necessary, make that essential. NASCAR has announced a five-year-plan (sounds like an unnamed car company’s marketing plan) to rebuild the brand. According to the Journal article this includes recruiting younger and more diverse fans, improving the competiveness of the racecars, updating the fans in the stand experience, accepting credit cars (duh!) and other activities. How’s it gonna work? NASCAR’s marketing chief is quoted as saying, “You can feel the excitement and optimism.” Sure you can.