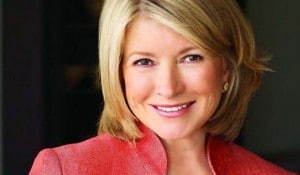 Martha Stewart will team up with Toyota for the launch of the new Avalon.

Sheets, towels, paint, pots, pans, plants, party planning, gardening, television shows, publications and more are just some of the associations Martha Stewart has used to become one of most powerful women and brands — targeted to an estimated 66 million women every month. Now add Toyota and the Japanese brand’s all-new 2013 Avalon which becomes the latest product on Ms. Stewart’s resume as part of “Martha Stewart’s American Made initiative.”

A Toyota spokesperson noted, “Partnering with Martha Stewart and the American Made initiative made perfect sense for us – after all, about 70% of Toyota vehicles sold in the US are built here.  And, the 2013 Toyota Avalon is the perfect example of our commitment to building in America.  The Avalon was designed, engineered and built right here in the USA.”

“After Toyota shared the story of the all-new Toyota Avalon with Martha and her executive team, she invited us to be part of this program.  Martha has been a fan and owner of Toyota vehicles over many years.  Martha visited the Georgetown, Kentucky plant and watched the assembly of the Avalon. Martha’s video crews captured extensive footage, which was used to showcase the American influence on the all-new Toyota Avalon at a two-day event October 17th and 18th in New York City.”

Future plans were not forthcoming on how and when Toyota would join with Martha Stewart’s empire of brands. 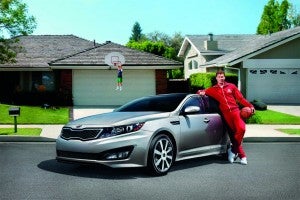 NBA superstar Blake Griffin is back with Kia.

Star jocks in pro football, baseball and golf have been the go-to endorsers for car brands for decades, but pro basketball players have been rare until recently. Blake Griffin, the superstar spokesperson and global brand ambassador of Kia, led the way during last year’s abbreviated season.

This year’s full season, which kicked off earlier this week, saw the premier of Griffin in two clever new commercials in the time travels theme. (He’ll appear in five spots for the full season). The new commercials will run on network and cable NBA television and TNT, ESPN and ABC, print and digital mediums as well as the usual social sites. Click on the following links to view Free Throw and Football that tip off the campaign.

In both, Griffin displays a pleasant, self-deprecating sense of humor as he visits himself as a nine-year-old to sell the new Optima and Kia’s voice activated infotainment system. Both commercials reuse the same intro set-ups which I found negative, but then move quickly into the heart of the spots which are neither contrived nor over-produced. Score Kia and their agency David+Goliath the winner over Volvo in NBA endorsements.

Huh? Fashionistas: A Hit and Opps

Automotive brands continue their launch into the fashion world.

First the hit: BMW just announced a new 100 page lifestyle catalog in several categories of apparel products along with specialty items, miniature vehicles, bikes and other gear according to the release. Consumers can order from select dealers or visit the special catalog site. Just remember, prices are quoted in Euros.

The Oops: Bentley’s media release detailed the highlights of uber-luxury-necessities, “Bentley Motors are pleased to announce the launch of the 2013 Bentley Collection , providing a wide selection of new products, as well as invigorating existing favourites.  In the 2013 collection you will find unique items that reflect Bentley’s flair for design and attention to detail, with many of these exquisite products made in England exclusively for Bentley.” But upon clicking to see more detail of a highlighted item, the following rejoinder was rendered, “An error has occurred. We have been notified and will rectify the issue as soon as possible.” Oops. 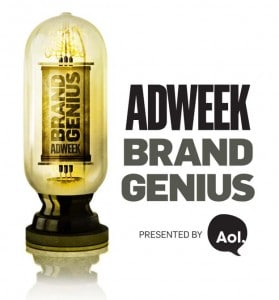 Chrysler Group’s CMO Olivier Francois is one of ten recipients of Adweek magazine’s annual Brand Genius Awards, which honors the ad industry’s top marketers for the most creative, innovative and successful brand building campaigns over the past year.  No surprise, however, that the event was postponed till November 28 due to Hurricane Sandy.

The noted TED – an acronym for (Technology, Entertainment and Design) — conferences  are a global set of events owned by the private non-profit Sapling Foundation, and formed to disseminate “ideas worth spreading.” TED has just announced the third cycle of“Ads Worth Spreading,” an initiative to find the 10 most compelling ad campaigns of the year because advertising has changed.

Mazda was the only automotive brand declared a winner by the prestigious group for this long form commercial in which Masahiro Moro, one of Mazda’s executives, gives a heartfelt talk about a secret that the city of Hiroshima and his company share — following conventional wisdom does not guarantee success. In fact, for a small company or a city facing incredible hardship, success comes from to defying popular opinion and following your vision without giving up. Click Here to view.

TED invited Ace Metrix to test each of the ads with consumers to gauge a wide range of dimensions that included Persuasion, Watchability and Emotional Sentiment. The result was a complete qualitative and quantitative view of each ad’s performance with a U.S. audience. This was one of the elements that informed the TED report that shares insights from the creatives behind the winning ads and the nomination teams that picked them.

Gone are the days when audience members were captive in front of their TV screens, unable to change the channel without getting up from the couch. It isn’t just that it’s easier to change the channel – now consumers can just as easily change their screens. Smartphones, tablets, laptops and desktops are everywhere but connecting with consumers has, paradoxically, become more difficult. As fast as advertising has changed, it must evolve faster still if it hopes to reach people today and, more to the point, tomorrow. Check out the report.  Click Here.