In recent years, if you wanted a true sports car, your only choices were to accept a car based a front-wheel drive econobox or cash in your 401(k) to buy a real sports car putting its power to the rear wheels.

No more. Subaru and Toyota – a seemingly unlikely pair to create this car – got together to develop what is essentially the Holy Grail of fun cars – the affordable sports car.

Think about it. Subaru, known for its variety of sensible all-wheel drive cars with just one performance-oriented model, the WRX, wants to build a car that is completely out of its element, a RWD sports car. Knowing it couldn’t justify the investment without a partner, the small Japanese automaker approached giant Toyota, known recently more for its fuel-sipping hybrids, but with a somewhat forgotten history of performance machines.

Together, they created a masterpiece, a car to be celebrated by everyone who enjoys driving, but wasn’t born with a trust fund in his mouth.

Toyota is selling its version as a Scion, calling it the FR-S – for front engine, rear drive, sport.

The amazing thing about the FR-S, and it’s twin, the Subaru BRZ, is what the makers left out. Want a high-end infotainment system? Look elsewhere. Think you need a roomy interior with space for four? Buy a WRX. It doesn’t even have map lights or lights for the vanity mirrors.

Purity of purpose is what the FR-S is all about. Here’s what it is: Light weight, low center of gravity, direct steering, just enough power to be interesting and not a whole lot else.

It all starts with low weight. At just 2,758 pounds, the FR-S is a flyweight. This is a car Lotus founder Colin Chapman would have proudly called his own.

Because of that obsession with weight, the interior is rather cozy. You don’t so much get into the FR-S as you put it on. There’s no buttons to sully the steering wheel because, well, they wouldn’t be any closer than the ones on the center stack.

About the only car on the market that provides a reasonable comparison to the FR-S is the Mazda Miata. The Miata is similar in that it emphasizes minimalism in the pursuit of RWD driving bliss. But where the Miata is little more than two seats attached to an engine supported by four wheels, the FR-S is actually somewhat useful. Need to schlep home a week’s worth of groceries for the family? The FR-S can do that. Going up north and want to bring the dog? Fido – not to mention the passenger in this equation – won’t be very happy about it.

The FR-S has a pair of back seats, but they’re pretty much pointless. At 5-foot-10, I moved the passenger seat up enough that I could fold myself into the back seat. I could sit there, leaning onto the other rear seat. But then I couldn’t sit in the front seat in that position. Planning to put more than two people in your FR-S? Anyone who sits in back better not have legs. About the best thing about the rear seats is that one-piece seatback folds down, making room for a complete set of mounted tires. Can you say track day?

The FR-S would be a joy in that environment. This car is not about extreme levels of grip. With just 215/45 17-inch tires, the Michelin Primacy HP tires will slide a bit. But the steering is right now direct and so precise, you could run over a pebble at the corner apex.

Despite that high level of cornering precision, the ride is still very good. For a car with this level of capability, it’s rather remarkable.

The Subaru boxer motor is an important part of the equation. A boxer’s mass is lower, which contributes to the car’s extremely low center of gravity.

What the FR-S won’t do is outrun a lot of other sporty cars. In fact, it won’t keep up with many everyday V-6 sedans. But that’s part of the fun. Getting the most out of the small engine means rowing the gears, keeping it high in the rev band to maintain acceleration. It’s a good think the transmission is joy to shift. It has a delightfully mechanical feel and sound.

Toyota contributes its trick port and direct injection system to the 2.0-liter Subaru boxer four cylinder to create 200 horsepower at a lofty 7,000 rpm. That peak horsepower is good, but with no forced induction, the little engine only makes 151 lb.-ft. torque and it peaks at stratospheric 6,600 rpm. But the torque curve is fairly flat and there’s decent pull from about 3,000 rpm. The engine makes somewhat coarse sounds, but it loves to rev to its 7,400 rpm redline nonetheless.

Not surprisingly, some enthusiasts are already calling for more power, wondering if Subaru/Toyota might provide it. Without a doubt, the chassis could handle it. But will one of the automakers or both offer it? Adding big aftermarket power, such as with a turbo, might prove problematic because the engine has a 12.5:1 compression ratio. Most turbocharged engines have lower compression ratios to avoid detonation.

Instead of figuring out ways to get more power, maybe we should view the FR-S as the new way to have driving fun in a world where automakers are under intense pressure to offer cars with better fuel economy. On that count, the FR-S delivers. Despite having the go pedal jammed against the firewall for extended periods, we saw 29 mpg on mostly highways and rural two-lanes. With the six-speed manual trans, the FR-S is rated at 22 city, 33 highway. The available six-speed automatic ($1,100) provides even better fuel economy, raising the highway number to 34.

The FR-S starts at $24,955. It comes with an eight-speaker stereo with Bluetooth, leather-wrapped steering wheel and shift knob, sport seats, keyless entry and the usual power stuff including windows, locks and mirrors. With just a $26 organizer insert for the movable drink holder, the test vehicle still scooched under the 25 grand marker at $24,981. 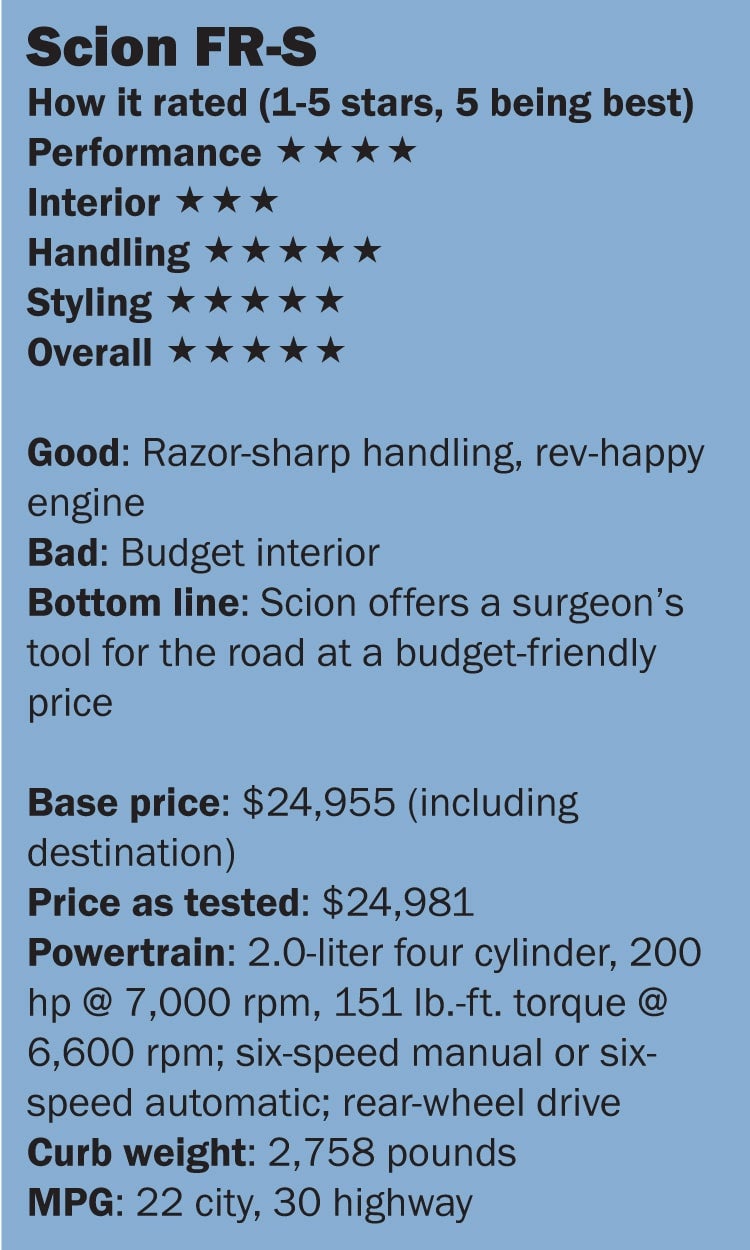 Criticisms? The clutch is a little light with take-up that is a little too high, yet still there’s enough push back that it is easy to modulate. Some of the interior materials show the efforts the automakers made to keep the price down. For example, the parking brake boot – a piece you will touch often since it is on the left side of the center console against your right leg– is cheap vinyl. And while we know that our hands should be at 10 and 2 on the wheel, a place to rest an elbow on the center console would be nice. But the dash and the window sills are cushy soft.

There’s a story about Akio Toyoda, grandson of the founder of the company, saying he wanted to see more passion in the company’s showrooms. An amateur racecar driver, Toyoda wanted the company to develop fun cars again. This is not foreign territory for Toyota, even though today it’s more known for fuel economy. Toyota has a long history of sporty models including the Celica, Supra and MR2, even going all the way back to the 2000GT of the 1960s, a car that served as inspiration for the FR-S’ design.

Toyoda said he wanted cars with more passion. Well, the FR-S delivers. This purpose-built sports car is simply dripping in it.