How to avoid a flood-damaged car – and what to do if it’s yours. 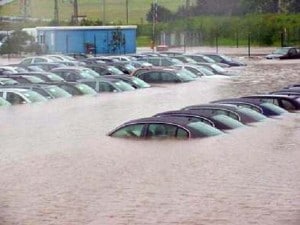 Could some of these flooded cars wind up back on the market?

It could be days, even weeks, before the storm-battered Eastern Seaboard dries out.  Brutal winds and extensive flooding, from Maine to the Carolinas, has wrecked homes and businesses, and left millions without power, even the New York subway system forced to close.

The destruction is likely to include thousands of vehicles damaged or destroyed by floodwater. In some cases, vehicles can be repaired. But many will have suffered extensive, irreparable damage and should be scrapped.  That doesn’t mean they will be.

If recent history is any indication, a number of seriously flood-damaged vehicles will wind up on used car lots and sold to unsuspecting consumers. Experts say half of the vehicles damaged or destroyed by Hurricane Floyd were put back on the road.

“A car that’s been in a flood, with the engine submerged for any length of time, will never be the same,” said Carl Sullivan, who has nearly two decades of experience inspecting vehicles for AiM, a California-based team of auto inspectors.  “It’s important for used car shoppers to know how to spot flood damage no matter where they live, because these cars can end up on a dealer lot anywhere in the country.”

Many states, such as New York and New Jersey, have strict rules covering vehicles that have been totaled in accidents or floods – as well as those repurchased by a manufacturer under so-called lemon laws.

The good news is that the federal government began to require totaled vehicles be listed on a national database as of 2009.  But there are still ways to get around that, experts warn.

Appropriately known as “title washing,” crooked owners or dealers will sometimes move cars from state to state to state, as record-keeping and registration policies vary across the country and a notation that indicates the vehicle was wrecked in one state may “wash” off when it’s moved to another state.

In some cases, AiM warns that scam artists may switch VINs, or Vehicle Identification Numbers, to eliminate the record of a car that was damaged by floodwaters.

How many cars were damaged or destroyed by this week’s massive storm remains to be seen but as many as 600,000 vehicles were claimed by Hurricanes Rita, Katrina and Wilma in 2005, according to CarFax, a service designed to help potential used car buyers track the history of a vehicle.

“Many of these cars are still showing up for sale around the country,” CarFax notes, the service’s website pointing out that of 75,000 vehicles damaged by 1999’s Hurricane Floyd, “more than half were put back on the road.”

In some cases, the damage may be minimal and easily repaired, especially if it didn’t reach the engine. Fresh water from flooded streams may have less of an impact than saltwater that can quickly result in extensive corrosion.  But flooding, in general, can cause extensive damage.

“A car’s engine, electronics, fuel system, airbags and brakes are all extremely susceptible to flood water,” said AiM’s Sullivan. “It’s extremely important to find any water damage before you invest your money in a used car, and a professional inspection will find flood damage no matter how a seller tries to hide it.”

The veteran inspector offers up a number of tips on what a used car buyer should watch for to help catch a vehicle damaged by flooding:

• Water or condensation in the headlights or taillights could be a tip-off to flood-related problems;
• A musty odor in the vehicle, which may be from moldy carpeting or padding. If possible, pull up the carpeting to see how far water may have risen in the vehicle, and also if any moisture remains;
• Mud in the seat belt tracks or seat belt tensioners;
• Water in the spare tire well in a vehicle’s trunk;
• A sagging headliner, particularly on a late-model vehicle;
• Corrosion in the vehicle’s undercarriage, such as on brake lines or around the fuel tank;

This could be a sign of saltwater damage. It’s different from snow-belt cars which typically get road salt on frame rails, notes AiM. But when corrosion appears near the top of the springs or shock towers are corroded, these are clears signs a vehicle has suffered flood-related damage.

A close inspection can turn up other tips, says Sullivan, who says he even found two fish under one vehicle’s back seat. “That was a pretty sure sign the car had been flooded.”

As for what to do if it’s your car that’s been damaged by a flood, your first step is likely to involve checking your insurance policy. Comprehensive policies usually cover flood damage. Liability insurance is likely limited to any damage caused by a collision.

If your vehicle appears to have been involved in flooding, the National Automobile Dealers Association recommends you not try to start it until it’s been thoroughly inspected and cleaned.

But if possible, take steps to dry out the vehicle as quickly as possible to reduce corrosion and other potential damage.

Experts suggest brake parts be inspected – and, if necessary, replaced.  Bearings should also be repacked on rear-wheel-drive vehicles.

Among the parts most vulnerable to damage are electrical components, whether electronic engine controllers, airbag systems or infotainment systems. All wiring and components should be carefully inspected and, if necessary, replaced.

Also check to see if foam, padding and insulation has been soaked. They may not easily release moisture and could quickly develop mold or mildew.

NADA warns that damage from flooding may not begin to become apparent for 90 days or more.

That’s why most flood-damaged vehicles will be declared total losses.

“We’d say that if water got any further than the floor of the car, it’s junk,” said Tom Magliozzi, half of the NPR “Car Show” team known to fans as Click and Clack.