Less expensive model to debut after launch of US production. 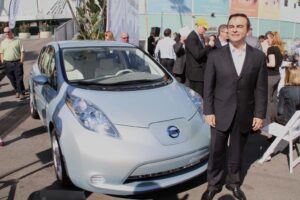 Hoping to sharply boost demand – while also taking advantage of its new, lower-cost U.S. production base – Nissan plans to introduce a lower-priced version of the Leaf battery-electric vehicle next year.

The move will follow the December 2012 launch of production of the Leaf on a new assembly line at the sprawling Nissan manufacturing center in Smyrna, Tennessee.  Currently, the battery car is imported from Japan – which means it is subject to lopsided exchange rates penalizing the Japanese yen.

Cutting the price could prove critical to near-term sales, as well as the long-term viability, of the Nissan Leaf. After a moderately strong start in 2011, sales have taken an unexpected dive this year.

The new model will feature far less content, “though this is not a stripper,” according to a well-placed Nissan source.  That translates into no navigation system or HID headlights – features normally not found in the segment a vehicle the size of a Nissan Leaf would normally compete in were it not for its unique battery drivetrain.

The base price of the 2012 Nissan Leaf is now $36,050 – not including the $7,500 federal tax credit the vehicle is eligible for.  That was an increase of $2,400 over the 2011 model.  How much the price tag will drop on the new entry model is unclear but based on the typical option price for content being dropped, the sticker is likely to show something in the lower $30,000 range.

And after working in that government subsidy a buyer would be able to drive off with the battery car for something at or under $25,000. That would put the new model closer to what a conventionally powered vehicle similar to the Leaf in all other ways might command.

Moving production to the U.S. has been in the works since well before Nissan launched the Leaf in late 2010.  Ultimately, Nissan and its French alliance partner Renault hope to have the capacity to produce about 550,000 battery cars annually at plants in the U.S., Japan and Europe.  Leaf will be just one of those vehicles, however, with those factories also churning out models for Renault as well as Nissan’s luxury arm which will bring its new Infiniti LE model to market sometime in 2014.

With the yen at a near-record high against the dollar, current exchange rates seriously penalize any product shipped to the U.S. from Japan, whether an automobile, a TV or even sushi rice.  Building the Leaf in the U.S., said the Nissan insider, “give us an opportunity to lower our cost base.”

Meanwhile, other Nissan officials including Andy Palmer, the man in charge of the company’s electrification efforts, say their goal is to further drive down costs as production volumes increase and competition grows among battery suppliers.

The lithium-ion battery pack is the single most expensive component in the Nissan Leaf – as with most battery-electric vehicles.  When the Leaf program was first conceived, LIon batteries were running around $1,000 per kilowatt-hour.  Considering the 24 kWh of batteries in the Nissan vehicle that’s a steep penalty.

Prices have begun to plunge and Nissan sources have said their goal is to reach a cost of around $400 per kWh before the end of the current Leaf model’s lifecycle. Boston Consulting, meanwhile, has projected that to become truly cost-competitive with gas power batteries will have to further dip to as low as $200 per kWh.

That consulting firm is just one of many to warn that price is one of the critical obstacles to battery-car demand – another being limited range.  How much the current price has held back demand for the Leaf is uncertain but it’s clear the vehicle has lost momentum this year.

Nissan officials have cautioned that the supply of Leaf battery cars has been limited because the maker has been launching sales in other global markets this year. So, the start-up of the Smyrna battery-car line, along with the addition of the new, lower-price model, could be the real test of market demand for the Nissan Leaf.