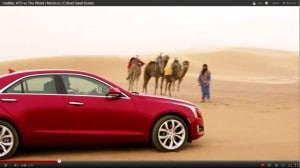 Cadillac vs. The World

The scarcity of these columns the past several months was caused by a lengthy health hiatus not a lack of news, opinion or comments about automotive marketing, advertising and promotion. Far, far from it.

Confined for weeks to a hospital bed most of my non-sleep hours were spent watching TV, hours of mind-numbing reality programs, news from both sides, Wimbledon tennis coverage, the London Olympics and cooking shows.

Interspersed were a few good commercials and some not-so-good car commercials one could imagine especially those terrible summer sale commercials.

The Car Ads of Summer – another bummer

Based on ranking research I just received from Ace Metrix for the top ten auto commercials which aired from July 15 to Aug. 15 based on their auto industry norm score of 545. The top 10 spots were:

With their mega-media budgets it was hard to miss the Caddy, Bimmer or Chevy spots but critics’ opinions are often divergent from the general public; ranking, however, has nothing to do with likeability, creative concept, brand impact or motivation to research. There’s no need to have links to these commercials since they are now old news but I feel compelled to express my opinion on six of the commercials which made my filings ache:

The Fall Forecast – who will win the new mid-size sedan advertising battle?

My email has been deluged with releases about the many new advertising campaigns just or about to be introduced for the new mid sedans. This fall in primetime and sports programming commercials for these new models will be ubiquitous, until a couple weeks before the presidential election, but will regain impact after Americans decide who will be our next leader. Some random thoughts based on limited information:

As new commercials become available they will be reviewed in future columns. Thanks to the many who wished me good health and quick recovery during my health crisis.