Wireless Detection System Could Save Pedestrians 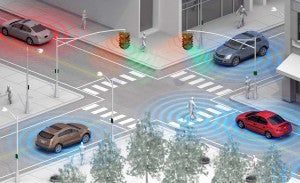 A new pedestrian system using WiFi Direct technology is under study by GM.

You begin to make a turn around a downtown corner only to slam on your brakes as a runner jogs into the intersection.  If you’re lucky, everyone is okay – but pedestrian-car collisions account for thousands of fatalities and countless injuries each year.

New technologies are beginning to help, such as backup cameras and radar-based systems like Volvo’s CitySafety. But they can’t help if they can’t see a pedestrian. A new approach under study by General Motors would got a step further, using a technology called WiFi Direct to help spot pedestrians who are out of the line of sight for conventional warning systems.

“This new wireless capability could warn drivers about pedestrians who might be stepping into the roadway from behind a parked vehicle, or bicyclists who are riding in the car’s blind spot,” said Nady Boules, GM Global R&D director of the Electrical and Control Systems Research Lab.

WiFi Direct is similar to the more familiar form of WiFi in that it allows electronic devices to communicate with one another – but it doesn’t require the use of a central access point or, with more conventional smartphone systems, the need to connect with local cellphone towers.  The newer system could become a central part of advanced vehicle communications systems, whether connecting one car to another or a pedestrian and a car.

Pedestrians could effectively create a buffer zone for themselves by carrying a WiFi Direct-equipped smartphone.  The technology has a maximum range equal to the length of about two football fields – though that would be significantly shortened by the real-world obstacles found on most city streets.  Still, that could provide enough of a warning to significantly reduce pedestrian collisions.

While such incidents have been dropping in recent years there were still 4,280 pedestrian fatalities in 2010, according to the National Highway Traffic Safety Administration, with another 618 bicyclists killed.

Automakers have already begun loading up cars with advanced sensor systems using radar, sonar, laser and vision-based technologies.  But experts believe the next step will be to create Vehicle-to-Vehicle, or V2V, and Vehicle-to-Infrastructure, or V2I systems that can provide a more distant warning – and cut through rain, snow or other hazards that might limit the functionality of onboard warning devices.

The downside to a system using WiFi Direct or some other form two-way communications is that they can only work if another vehicle — or a pedestrian — is using the technology. That means that motorists will still have to rely on their eyes and ears, as well, for the foreseeable future.