Readers Respond With Some Wild, Weird and Wacky Street Signs

A look at some of our first entries.

We expected nothing less.  When we announced TheDetroitBureau.com’s new Wild, Weird and Wacky Street Signs Contest we anticipated receiving a fair number of entries from readers around the world.  And we haven’t been disappointed.  We don’t expect you will be, either.

Here’s a first look at some of our favorites from the first batch that’s landed in our digital mailbox, starting with one from Stephen Henson, who’s on long-term assignment in Asia.  We’d like to believe that the English translation actually might help us find the restaurant but won’t count on it.  Henson’s snapshot is just one of many entries from Asia where we know folks who specialize in collecting “Japlish,” signs featuring mauled version of the English language.

Of course, even where English is the native tongue we find that we can be divided by a common language.  Several readers submitted images from the London Underground, or subway, that declared, “Way Out.”  Actually, it wasn’t a return to Hippie-speak, just the British way of pointing to the exit. 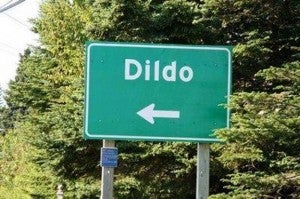 The Wild, Weird and Wacky Street Signs Contest debuted over the Independence Day holiday break and will continue to take entries through August 17th.  We’ll then ask readers to vote for the winners – which will be announced over the Labor Day holiday. We’ve got some great prizes, including a $500 Bridgestone tire gift certificate. You can find out more about the contest by Clicking Here.  But keep reading to check out more of our early entries. 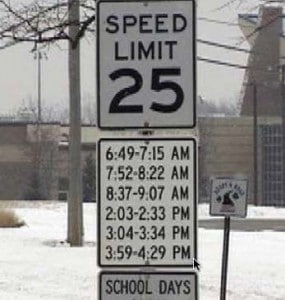 No surprise, there are plenty of double entendres – intentional or otherwise – to be found, including this simple sign spotted by reader Lisa Derby during a drive through rural Newfoundland.  Yep, it’s really a town in the Canadian province, a fishing village along Trinity Bay.

We realize it can be difficult, sometimes, to make sure motorists are fully apprised of all the rules of the road, but after seeing this sign submitted by Denise Turley, we’re not sure whether to slow down, turn around or simply park the car and walk. 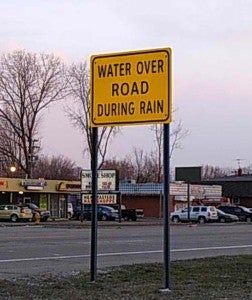 There’s a lot of debate about our so-called “Nanny Society,” and the fact that our tendency to use the legal system to excess has led to an over-abundance of warning signs – such as one on an iron we recently purchased that declared, “Do Not Use on Head.”  But Mark Dapoz found a sign that seems to overstate the obvious. 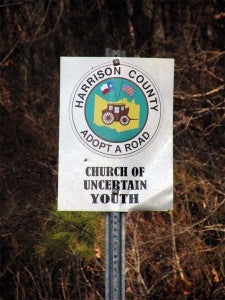 Meanwhile, we know it can be tough growing up in today’s world.  There are so many potential threats, so many potential rules.  Sexual roles have been redefined.  And technology is invading every aspect of our life leading many young people to struggle with their identity.  Some might say that kids today don’t have a prayer.  Now we know better, thanks to reader Jen Stanford. 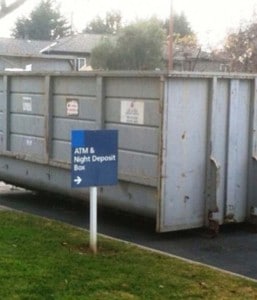 Finally, we realize that the nation’s banking industry nearly collapsed a few years ago.  And as the multi-billion-dollar trading losses at Chase demonstrate, things haven’t completely turned around yet.  But we had to take a step back when this entry from Dale Arends arrived.  If you don’t mind, we’d rather wait until tomorrow when there’s a teller at our local bank branch.