A dream car prepares for the Woodward Dream Cruise. 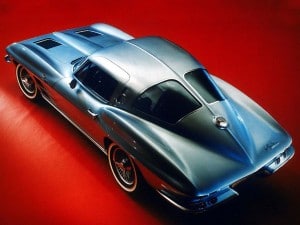 Perhaps the most popular Corvette model ever, the 1963 "Split-Window."

Okay, we’re about half way between the Chevrolet Corvette’s 59th birthday, June 30, and the Woodward Dream Cruise, August 18—at which there likely will be more Corvettes parading than any other model.

For one thing, America’s only mass-production sports car has never changed its name, unless you count the abbreviated ‘Vette moniker, or the Stingray designation used on a few ‘60s models. That helps, in an industry where Chevy II became Nova, Chevelle became Malibu and a lot of once-familiar car names like Plymouth, Pontiac and Mercury just disappeared.

I can claim to have been on hand for the original viewing of the Corvette as an Autoshow Queen at GM’s Motorama in New York City’s Waldorf-Astoria Hotel in January 1953.  I’m sure it was the sensation of the show, but in all honesty—sorry for the disappointment—I have no memory of it whatsoever.  At college, I had a friend who was also a car nut, but of the more exotic type.  He matched my humble Plymouth sedan with his baby blue Sunbeam Alpine, identical to the car Grace Kelly drove in “To Catch a Thief.” 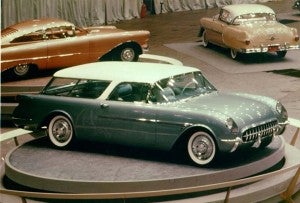 The 1954 Chevrolet Corvette Nomad Concept Car on display at the GM Motorama.

In one car or the other, we journeyed down the Merritt Parkway to New York to see all the Show Queens at the Motorama.

Fortunately for Corvette fans, the rest of the visitors weren’t like me.  GM and Chevrolet were so impressed by the response to that Corvette concept vehicle that they rushed it into production.  The first of the experimental fiberglass-bodied roadsters came off the Chevrolet assembly line in Flint on June 30, 1953, amazingly, less than six months later.

The problem with fiberglass was that no one knew how to produce such bodies in volume production.  It took time to “cure” the plastic material, and more time to figure out how to apply a paint coating that would stay fixed.  All original Corvettes, therefore, were white with, as I recall, red leather interiors.  The best Chevrolet could manage for a powertrain was the trusty Chevy Stovebolt OHV Six rigged with pesky triple carburetion and hooked to a two-speed Powerglide torque-convertor automatic transmission.  Ed Cole’s masterpiece, the 265-cid Chevy V8, was two model years away.

Amazingly, Corvette has stayed in the Chevrolet car line-up right down to the present and, as nearly as I can tell, never been cheapened.  To the contrary, successive models have introduced dozens of new technologies, many, however, only applicable to the low volume sports car genre.

Second generation ‘Vettes followed for the 1963 Model Year, for my money the most sensational Corvette ever, the split-rear-window Sting Ray coupe.  (The price collectors will pay supports that emotional judgment, though Zora Arkus-Duntov, the Russian genius who helped transform the Corvette from an acceptable sports car into a true legend, never liked the design. He ultimately won out over GM design chief Bill Mitchell and got the back window switched to a single sheet of glass – better vision, perhaps, but not quite the distinctive look of the ’63.)

Today Corvette prices have soared to a range of $49,600 to $71,095, and with many model and option variations they are more custom cars than ever before.  Production and Sales are limited in order to keep GM’s Corporate Average Fuel Economy in line, totaling around 13,000 annually in recent years.

There are many Corvette tales that could be told, many of which I have related before on TheDetroitBureau.com, but let this stand to whet your appetite for the Dream Cruise.

Oh, yes, Plug Time.  A lot of these facts and figures are drawn from my latest photographic history book, Chevrolet 1911-1960.  Publisher Arcadia is releasing it for sale the week of August 6.  The sequel volume covering 1960 to the present is in production.