Details Leak on New 2013 Honda Accord 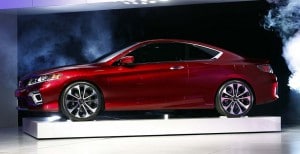 So far, Honda has only shown this concept Accord Coupe, but details are beginning to leak out.

The auto industry usually isn’t good at keeping secrets, though Honda has been struggling to keep a wrap on plans for the critical 2013 update of the midsize Accord.  But details have begun to leak out, including some recent spy shots and, now, a list of ’13 updates that one of the Japanese maker’s dealers is revealing in a press release of its own.

Apparently, the folks at Tuscon’s Chapman Honda have decided that the best way to move the outgoing Accords on their lot is by giving customers a preview of the new car.  That’s a sharp shift from traditional strategy.  Usually, retailers like to pretend nothing’s coming before they clear out inventory.

“We’re confident that drivers will find that the 2013 Accord is a very well-balanced product…whether they’re talking about interior packaging, content of the vehicle, or the fuel economy,” said Chapman Honda General Manager Neb Yonas in a press release.

Among the details provided by the dealership, it appears the 2013 Honda Accord will include:

The release also notes that the 2013 Accord “comes standard with ECO Assist vehicle efficiency system “which is a super-efficient mode to maximize fuel-efficiency.”

The dealership adds some more specifics to what Honda has already said about the three powertrains coming for the 2013 Accord.  The DOHC base inline-four will be direct-injected and make 181 horsepower and 177 lb-ft of torque.  It will be paired with either a 6-speed stick or Honda’s new CVT.

There will be an optional 3.5-liter V-6 that “will be more powerful and more efficient than the current engine.”

And a hybrid will follow early in calendar 2013 using a 2.0-liter I-4 mated to a 120 kilowatt electric motor.  The hybrid will migrate to more advanced lithium-ion batteries and in contrast with most conventional hybrids, such as the Toyota Prius or Camry Hybrid models – which are limited to short distances and low speeds in EV mode – the 2013 Accord Hybrid will be capable of 10 miles on battery alone at up to 62 mph.

That is, in fact, only slightly less than what the new and upgraded Prius Plug-in is capable of – and then only after a long charge.

The new Accord, noted Chapman officials, will feature lane departure warning, forward collision warning and LaneWatch blind spot alert while a backup camera will now become standard on all new Accord models.

Not surprisingly, after disclosing all the things will get it is now trying to clear out the old 2012 models with a $199 fire sale.

We have to wonder if anyone will be fired for saying more than Honda had planned.  The maker staged a limited preview of an Accord Coupe Concept during the Detroit Auto Show last January – to mixed reviews – but rumors that a sedan concept might then appear at the New York Auto Show in April proved false.

Honda has traditionally been a close second to the best-selling Toyota Camry in the midsize market but Accord has been losing momentum lately, Nissan now in the number two spot with its Altima.  And with an all-new Altima about to launch, Nissan CEO Carlos Ghosn has proclaimed a goal of toppling Toyota, as well.

While it’s too early to see how that battle will shake out there’s no question competition in the midsize market is rapidly heating up.  Along with the new Accord and Camry, Ford is preparing to launch the striking new 2013 Fusion while Chevrolet will soon add the rest of its new Malibu line.  It has already launched the high-mileage Malibu Eco.

Perhaps there’s reason for the Tucson dealer to be trying to drum up new business now?