Torrid pace not likely to slow much anytime soon. 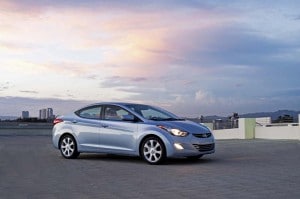 Strong demand for the Elantra has helped drive up the price of the typical Hyundai product this year.

Remember “sticker shock”?  After several years of heavily discounting their products in a desperate bid to keep assembly lines rolling, automakers are finding themselves back in the driver’s seat once again – pushing prices to record levels.

And it’s “not a blip,” warns one senior analyst, who expects the trend to continue for several years. The good news for shoppers is that trade-ins are also yielding better prices – and while that new car, truck or crossover may command more money than ever before it’s also likely to include significantly more features and markedly better fuel economy than the vehicle it replaces.

The average new vehicle sold in the U.S. in March cost $30,748, according to data tracking service TrueCar.com.  That was up from $28,771 a year earlier and marks an all-time record.

“It’s not a blip. It’s a trend we’ve been seeing for months,” said Jesse Toprak, TrueCar’s chief automotive analyst.  That’s despite the fact, he says, that “This might seem counter-intuitive at a time you might expect to see people buying cheaper cars because fuel costs are rising so fast.”

But there’ve been a number of counter-intuitive trends in the industry in recent months, notably the surge in overall car sales, which have been rebounding faster than the U.S. economy – despite the fuel price spike that, in decades past, might have been expected to result in a sharp downturn in demand.

There are a number of reasons why new car prices are spiking.  One key reason is “There’s a better equilibrium between supply and demand,” noted Toprak, “which means discounting isn’t needed as much.”

While March saw vehicle sales surge to an annualized rate of around 14.5 million, that’s a long way from the decade-old industry peak of around 17.1 million.  In years past, makers would’ve been tacking on massive rebates and other incentives to boost sales.  But in a significant move during the recent recession, many makers slashed production capacity, especially Detroit’s Big Three.

And so, with the remaining plants operating at or near – in fact, often above – their rated capacity, carmakers don’t need to be so generous. March incentives, according to TrueCar, slipped 1.8%, year-over-year, to an average $2,440 per vehicle.

There’s another reason why the run-up in pricing might seem unlikely.  There’s been a significant upturn in the small car market, motorists trading big SUVs for compact crossovers and full-size sedans for subcompacts.  Nearly one in four vehicles sold in March fell into the small car category, up from barely one in six as recently as December, according to industry data.

But don’t think of them as the classic “econoboxes” that proved so popular – briefly – in the wake of the twin oil shocks of the 1970s. Products like the 2012 Ford Focus and the latest-generation Hyundai Accent are far more stylish and well-equipped.

Consumers, meanwhile, “are upgrading the vehicles they’re buying,” no matter what class they fall into, noted Art Spinella, lead researcher at CNW Marketing.

In the decades that CNW has tracked automotive buying patterns, the typical vehicle will fall into the 50th percentile — almost exactly halfway between the base price of a specific nameplate and the most heavily loaded version.  In other words, if the entry model was $20,000 and a fully loaded version was $40,000, the typical buyer would spend $30,000.

But now, said Spinella, the average vehicle is falling into the 82nd percentile.  Using the same example, the typical shopper now drives off in a vehicle costing $36,400.

“People are trying to stuff all the bells and whistles they can in a car” in part, Spinella explained, because “they plan to keep longer.”  Prior to the Great Recession, buyers told CNW they plan to hold onto a new vehicle, on average, about 42 months.  That’s now up to 57 months.

The good news is that buyers aren’t necessarily spending a lot more out-of-pocket.  That’s because used car prices have also surged over the last several years.  During the first quarter of 2012, the price of the average previously owned vehicle sold through a franchised new car dealer rose 12.5%, or about $1,400.  For the consumer, that meant a bigger trade-in allowance to apply to a new vehicle.

The upward trend in pricing is almost certain to continue, at least barring a sharp setback to the economy, industry analysts agree.

“The long-term trend is gradual price increases continuing for several more years as sales recover to 15 million and even 16 million,” forecast TrueCar’s Toprak.  “But the pace (of the increase) we’ve seen over the last several years isn’t sustainable.”

He anticipates prices will start to level off as they reach an average $31,000.