But can infrastructure keep up? 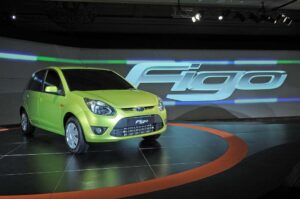 Hoping to tap into the booming Indian market, Ford recently went to Delhi to reveal the new Figo.

Already humbled by years of economic stagnation and last year’s devastating earthquake and tsunami, Japan’s continuing decline as one of the world’s leading auto markets is likely to be taken down another peg.

A new study by IHS Automotive predicts that sales in India will reach 4.88 million by 2016, which would move that emerging nation past Japan, which the consulting firm forecasts will see automotive sales of just 4.51 million that year.

Japanese auto sales have been running at barely half their peak rate during the Asian nation’s bubble economy and show little sign of recovery.  In fact, IHS expects the market’s sales to again taper off to just 4.25 million by 2020.  Japan recorded 4.87 million new vehicle sales in 2010 but saw that number dip to 4.13 million the following year, much of that due to lost production and other problems caused by the March 2011 natural disaster.

At one time, Japan was one of the world’s three largest regional markets, behind the U.S. and Europe.  It has now slipped well behind China, which soared to the global number one spot several years ago.  In 2011, Chinese consumers purchased 17.66 million automobiles, according to IHS data, the firm forecasting that will reach 30.68 million by decade’s end.

Some observers expect India to experience the next big automotive boom, linking their expectations to the surge in the country’s population – which could surpass China’s in the coming decades.  But India’s economy has yet to match the power of China’s, and the country hasn’t come close to setting up the necessary sort of road infrastructure.  Many communities are still reachable only by donkey path while big cities are choked with traffic due to the lack of enough major roadways.

But demand is nonetheless surging.  Indians bought 2.91 million new vehicles last year and IHS anticipates that growing to 6.73 million by 2020.

The IHS figures for Japan actually are a bit misleading, as that market has seen a substantial shift from conventional automobiles to pint-sized minivehicles, which are forecast to see demand for 5.19 million this year, rebounding from earthquake-struck 2011.