From Watchmaker’s Son to Auto Pioneer, Tracing the Roots of Louis Chevrolet 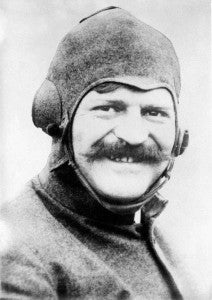 He tried his hand at making cars but the real passion for Louis Joseph Chevrolet was racing them.

Better late than never for the town of La Chaux-de-Fonds.

Nestled into the snow-covered Alps, it’s not a place the tourists often go, even if it is the third-largest community in the French-speaking cantons of Switzerland.  Yet its reach is surprisingly broad.  A disproportionate share of the town’s residents tick off their days toiling in the watch industry, with eagerly-sought brands like Rolex, Omega, Movado and Girard-Perregaux headquartered here.

But some of La Chaux-de-Fonds’ more legendary citizens had to leave to find their fame, among them Charles-Édouard Jeanneret, better known as architect Le Corbusier, and Louis Joseph Chevrolet.  The latter, the son of a local watchmaker, was born in the Jura Mountains town in 1878 but left by the time he was 20 to pursue a career in racing and automobile manufacturing.

He is, of course, the man who lent his name to the Chevrolet Motor Car Company, which the American emigrant cofounded with Billy Durant – himself the founder of General Motors, who had been forced out of GM and was looking for a way to get back into the auto industry.  Their venture was officially registered on November 3, 1911, triggering the extensive centennial celebrations that ran most of last year.

And for good reason.  After emerging from bankruptcy two years earlier, GM abandoned a number of brands, including well-known Pontiac, shifting emphasis to the marques still remaining.  Chevrolet is playing a particular important role as the singular focus of GM’s global expansion plans.  The maker set an all-time sales record of more than 5 million vehicles last month – clicking off an additional sale “every six seconds,” as Susan Docherty, president of Chevrolet of Europe is quick to point out. 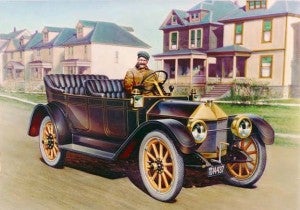 Notably, two-thirds of Chevy sales now take place outside the U.S., from Guangzhou, China to Geneva, Switzerland.  Chevy is still a minor factor in the European market, long played down in favor of GM’s Opel division.  But with that German-based brand struggling and deep in the red, GM is putting more emphasis on Chevrolet

One of the big challenges, acknowledged Docherty, during a recent conversation in Geneva, “is building brand awareness.”  So, the automaker is taking Chevy back to its roots.

A visit to what is often called “the Valley of Watches” reveals a city not much changed since Louis Chevrolet – often pictured with a leather racing helmet, bushy handlebar mustache and broad grin – was born here.  A UNESCO National Heritage Site, it is a town of tall but narrow homes, designed to maximize the light that came through the windows of the upper floors, where locals would carefully assemble watches in their home workshops before the era of electric lights and large factories.

The well-tended Parc de l’Ouest is the centerpiece of the old part of town, a knoll of a few acres size where local residents could be seen relaxing despite the brisk air on a recent sunny winter afternoon.  A nondescript piece of artwork anchors the central mall, the sort of piece that city fathers often commission more because of a son of duty to respect the arts than because of anything special about the sculpture itself.

But in the months ahead, that work will be trucked away, replaced but a more fitting piece meant to honor one of La-Chaux-de-Fonds most famous sons.  Working with nine-member jury of local and regional politicians, historians and art experts, Chevrolet will next week reveal the finalists in an ongoing competition to honor its founder.

There are already a few tributes in place, include Rue-Louis-Joseph-Chevrolet, and the wall at the local tourist board displays plaques from the annual “Louis Chevrolet Event,”           which last year attracted more than 1,000 Chevy owners to the city.

But the plan is to erect a large monument at the center of what, in English, is Park West.  Details have been kept a tight secret but four finalists will be announced next Monday.  They’re expected to range from the very literal to the abstract, but it’s a good shot they’ll feature the familiar Chevrolet bowtie somewhere.

That logo, incidentally, was created by Durant, not Louis Chevrolet.  The General Motors founder – who would eventually be forced out of GM again – reportedly saw the bowtie in the wallpaper of a French hotel, tore off a piece and brought it home with him, though there are several alternatives occasionally told.

What’s a matter of record is that Louis Chevrolet left his car company in 1915 after a falling out with Durant.  The timing was unfortunate, as it was soon generating enough profits for Durant to buy his way back into GM.  Chevy was merged into the automotive giant in 1917.

Louis Chevrolet returned to racing – along with brothers Gaston and Arthur.  He was a familiar face at the brickyard, racing four times in the Indianapolis 500 – albeit never doing better than a seventh-place finish in 1919.  Brother Gaston won the Indy a year later.

Louis Chevrolet’s racing career didn’t last much longer, nor did whatever money he was able to wring out of his entrepreneurial efforts.  He lost just about everything in the 1929 stock market crash. And adding insult to injury, Louis Joseph Chevrolet had to take a job working on the assembly line of the company he founded.  He died penniless on June 6, 1941.

His headstone sits in a cemetery not far from the Indianapolis Motor Speedway.  But Louis Joseph Chevrolet’s real monument will soon be found in his hometown of La Chaux-de-Fonds.

“He didn’t live here for long, but he represented the entrepreneurship of people who lived here,” said Caroline Choulat, who oversees economic development in the community. “The town is always proud of its inhabitants”