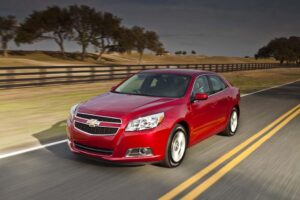 Unless you've been sleeping you may know that Chevy is bringing out an all-new version of the Malibu.

Ripley V. Winkel, the third generation Chevrolet dealer in Shaughnessy, NY, up the Hudson from Manhattan, decided to take his demonstrator, a 1992 Chevrolet K1500 4×4 up into the Catskills for a little R & R from the pressures of business and family.

Even in a small town where every family knew every other family and had done so for generations, he was not immune from the annoying complaints of customers, the jibes from Crusty O. Jones, the Ford dealer across the State Highway, and the demands of his wife and teenaged son and daughter. What Ripley wanted was a little peace and quiet, and he knew where to find it.

On his way up the winding black-topped road, he nipped occasionally at the jug of hard cider on the passenger seat. Through the open window, he could hear the thunder in the heights ahead. Finally he got to his destination, a little known outlook far over the valley. He carefully backed the pickup in, grabbed his jug and lay down under an big apple tree where he could appreciate the beauty spread out in front of him. 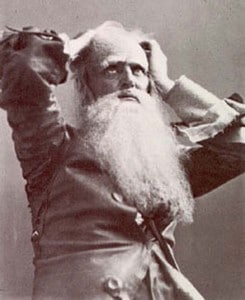 Now, where did I leave those car keys?

Ripley awoke with a start. Still groggy, he noticed, inexplicably, that he now wore a long beard, down to his waist. What kind of a joke had one of his pals played on him? Yet when he reached for the loops over his ears, there were none and the beard appeared to grow right from his jowls. He glanced at his watch, but it seemed to have stopped. I’d better get on home, he thought, Katherine will be worried.

But when he turned the key he’d left in the ignition switch, no starter grind resulted. Damn all, he thought, how could the battery have run down—there must have been a drain from a light on, maybe the one under the hood…he’d have the boys in Service fix it.

He merely let the truck coast down the hill a bit then let the clutch pedal out while in second gear as the engine rumbled to life. Continuing on back to town, there seemed to be some new houses along the road that he hadn’t noticed before. And the cars and trucks–– well, mostly trucks––in the drives looked unfamiliar. He shook his head as if to clear his mind. The cider must have muddled him, he thought.

As he came down into Shaughnessy, there seemed to be even more unfamiliar sights. First, a large paved parking lot in front of an expansive windowless building labeled “WalMart.” Wasn’t that one of those big stores out of Arkansas or somewhere in the South that was killing off small town merchants? What was it doing here? How had he missed knowing about it?

Then, as he turned onto NY 11 toward his own store, he discovered a large, modern dealership building on the corner, with a “Hyundai/Kia” sign over the showroom. Now what is that, I never heard of such a make, he puzzled. On the opposite corner was a small restaurant signed “Tim Horton.” That’s another odd one, he mused, they were in Canada, he remembered from a fishing trip to Ontario.

On the main drag ahead, though, where Winkel Chevrolet stood when he went up in the Catskills for his R & R, there was only a dusty showroom window and no sign. Many once busy stores on either side also seemed empty. Nor was Jones Ford across the street.

There was a newspaper box on the next corner, so Ripley stopped, found four quarters (!) for a paper and stepped back in amazement. The U.S. president pictured on page one was a light-skinned black man. What happened to Bill Clinton, who had just taken office?

Continuing along, he came to the outskirts at the other end of town and couldn’t believe what his eyes saw: there before him was a huge multi-building automobile dealership complex with both “Van Ford” and “Winkel Chevrolet” signs. This is too much, I’m still dreaming. He parked and stumbled over to a shiny new car with, however, a familiar “Mulroney” price sticker pasted in the rear door window.

But when he read the label, now Ripley thought he really had lost his mind. None of the line items made any sense: “CHEVROLET,” it proclaimed, “2013 MALIBU ECO 2SA.” That can’t be, Malibu is a model the Corporation discontinued ten years ago with the 1983 model, a nice six-passenger family sedan and wagon he had no hesitation recommending to his value-oriented customers. Ripley stepped around to the rear of the car, yes, it mounted the familiar Chevy bowtie on the deck lid, but it was larger and flashier with a gold center than he remembered seeing.

Then there was the posted EPA/DOT Fuel Economy numbers, 25 city, 37 highway, 29 combined, and most of all, the STANDARD VEHICLE PRICE of $26,845 and TOTAL VEHICLE PRICE with options and destination charge of $29,100.

This was no Chevrolet he had ever heard of!

Well, dear reader (as the saying goes)––and with apologies to Washington Irving, the early 19th Century creator of Rip Van Winkle, the fictional Dutch-American who slept through the American Revolution––after driving the new Malibu Eco for a week, inspecting its Owner Manual and flyspecking the price sticker, I thought this was the best way to bring home the enormous changes which have taken place in American cars in just two decades.

It’s not your father’s Chevrolet nor even your grandfather’s, but true to form, this Chevrolet still pursues the value promise that built Chevrolet from the time Big Bill Knudsen took over command from Chevrolet founder Billy Durant in the early 1920s.

The 2013 Malibu Eco, leaving aside its fuel-stingy aspects, is equipped with virtually every conceivable practical piece of equipment, avoiding the trap Ford fell into with its immature “My Ford” touch-screen instrumentation. While the Malibu does have some small touchscreen features, they are limited and seemed to work fine. In addition, the flats-screen monitor hinges upwards to reveal a storage compartment behind—on of many nice touches.

Are there any downsides? Well, yes, because the extra battery and associated hardware take up space behind the rear seat, luggage space is limited and the pass-through with the seatbacks folded down probably could accommodate a pair or two of skis, but little more.

Performance is good, electric steering easy and positive, ride smooth and sound level minimal. As with the Volt I test drove six months ago, the total package seems to be user friendly and well-, definitely not half-, developed.

This is a very competitive five-passenger sedan in a class crowded with able competitors. The main drawback I can assess is that they all seem to be rather boring looking four-door sedans. A variety of body choices seems another victim of Ripley V. Winkel’s memory.