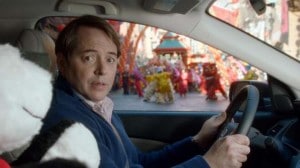 Matthew Broderick scored big for Honda by reprising his role as Ferris Bueller.

The Monday following the Super Bowl should be called Critics-day. The buzz, comments, criticism, complaints, statements — and some drivel – filling the web, the newspapers, the radio, networks news shows, blogs, Tweets, Facebookings, social outlets and other media is overwhelming.  Today, anyone and everyone is an ad critic.

The oft quoted sage of show biz, Samuel Goldwyn advised, “Don’t pay any attention to the critics – don’t even ignore them” a non sequitor that points to the importance of the viewer – consumers — in determining and evaluating the commercials on the game. Well, not quite. While the game’s ads were stunningly expensive, there must be someone in the corporate ranks who could – indeed, should — ask, “Was it effective?” Not just a ranking position or pop-poll from best to worst but something more stable and reliable than Jello.

Enter Ace Metrix, an industry authority in measuring and understanding the impact of advertising creative. Through patent-pending Ace Score™ measurement technology, Ace Metrix collects and measures the consumer impact of every nationally breaking TV ad in near real-time. Ace Scores are considered by many big advertisers to be the leader in delivering actionable insight by measuring creative effectiveness from television commercials. There’s is not a popularity contest, not a summary of critical comment, but a numerical score based on consumer reactions.  This means there will often be a difference, a dissimilarity and divergence in who ranks where.

The game was exciting, maybe one of the best Super Bowls ever.  The commercials, not just automobile category but all of ‘em were what was expected noted Peter Diablo, president and CEO of Ace Metrix who said in a phone call this morning, “Some at the top, more at the middle of the pack and those who are at the bottom.”  Which brings us to the automotive category. Quick refresher: there were 14 carvertisers whose messages accounted for 34% of all commercials during the NBC Television broadcast, but the main question I’ve been asked is: How did the Clint Eastwood Chrysler commercial do?

The Ace Score of this two minute commercial, Diablo told me, was 633 which mean it was number one in the automotive category of in-game spots — which it actually wasn’t, since it ran at the end of half time after MIA’s, ahem, pointed gesture.  Interestingly this ad scored significantly higher across the nation than last year’s Chrysler homage to Detroit, featuring rapper Eminem, which scored well in the Midwest but not so well in other regions. The Eastwood spot ranked much higher in the Ace Score for relevance than the previous commercial, perhaps because of its focus on problems not limited to the Motor City.  There were a few comments that “at first” this year’s Chrysler ad seemed like a political commercial – there have been some of those recently, haven’t there? Once again Chrysler has shown its creative cajones.

(To check out Clint Eastwood’s star turn for Chrysler – and find out why the ad was briefly blocked — Click Here.)

All Other Top Ten Auto Commercials

Data reviewed and analyzed provides a ranking based on Ace Metrix scores.

This year’s race for top ad is as close as the actual Super Bowl.  According to Ace Metrix, front runners for Top 5 most effective ads include M&M’s “Mrs. Brown” ad, Dorito’s two Crash the Super Bowl spots, and two polar bear spots from Coca-Cola: “Superstition” and “The Catch.”  While the final scores are still being tallied, here is an early look at what consumers thought worked (and didn’t) in this year’s Super Bowl ads:

59 percent of all Super Bowl ads were funny this year, and M&M’s “Mrs. Brown” ad is neck-and-neck with the Doritos’ “Sling Baby” ad as current leaders for the Top Ad of the Super Bowl Award, both scoring a lofty 671 Ace Score.

Cola Wars Were On  – but Won By Coke

While the game was exciting I felt most of commercials were boarding on or were boring. There was a dearth of creativity or originality across all categories as well as too many old or recycled tricks and tricks – dogs, kids, sex and sight gags. Full analysis from the auto category will be in next Friday’s column.