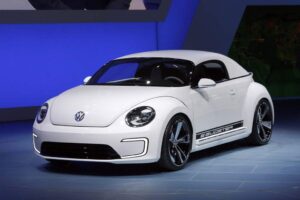 Volkswagen bugged out on its Detroit Auto Show news conference, the maker introducing the Beetle-based E-Bugster concept car, along with a hybrid version of its popular Jetta model.

Both are intended to show that despite its slow entry into the world of electrification, Volkswagen aims, by 2018, “to be the most sustainable automaker and will further invest heavily in research and development,” according to VW AG CEO Martin Winterkorn.

The E-Bugster, short for Electric-Bug speedster is the latest in VW’s growing line-up of Blue e-motion concepts.  It’s not your classic convertible but features a chopped and removable roof that gives it a look that some might find more like the new Mini Roadster than the classic Volkswagen Beetle. 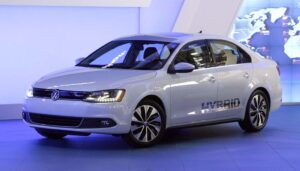 The concept vehicle is powered by a 114-horsepower electric motor which taps a lithium-ion battery stored under the trunk floor and rear bench seat.  It could provide an estimated 100 miles per charge and can be charged on regular wall power, a quick charge 220-volt system or a Level 3 quick charger that can give an 80% “fill-up” in as little as 30 minutes.

While we’re unlikely to see the E-Bugster in production anytime soon, VW is finally putting battery power into its showroom line-up. The latest entry is the Jetta Hybrid also making its world debut on the floor of Detroit’s Cobo Center.  The new compact model has been a solid success for Volkswagen since a new model, specifically designed with U.S. buyers in mind, rolled out in late 2010.

Now comes the hybrid, which is the first from any maker to mate its gas-electric engine/motor combination to a 7-speed dual-clutch transmission.

The powertrain features a turbocharged 1.4-liter inline four making 150 horsepower and 184 lb-ft of torque.  It is paired with a 27 hp electric motor.

VW says the Jetta Hybrid will be able to make 1.2 miles on battery power alone – at speeds under 44 mph – while it should bump the compact model’s fuel economy to 45 mpg.